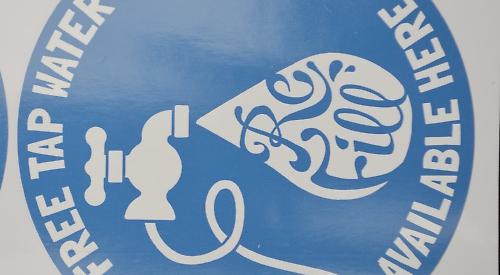 NEW drinking water fountains in Henley would cost up to £5,000 each.

The town council is considering the idea in response to the Refill campaign, which was launched in October and is designed to make refilling water bottles easy, convenient and cheap.

It is part of a national campaign to reduce plastic “pollution”.

Thames Water has agreed to help with the installation of fountains.

Huw Thomas, its regional government liaison officer, told members of the council’s town and community committee that the company supported the idea.

He said: “People have become very aware of the issue of single use plastic water bottles.

“People are drinking a lot more water in its natural state than they used to. It’s an essential product and needs to be carefully looked after.

“It’s essential to all of us and needs to be very carefully controlled in the way it’s made available.”

He said installing a water fountain cost between £4,000 and £5,000 and it was done by specialist firms and not Thames Water. Mr Thomas continued: “Any new connection to our network would need the installation of a water meter and then it’s the cost of water then on.

“You could come to us with some proposals and we can start working on that.

“How deep should the pipe be that goes into the fountain? Where do you put it? Is it outside someone’s house and are they happy with it? These are all things we can help you with.”

Councillor Sam Evans said there seemed be some logical places for fountains to go, such as outside the station.

“It would be great to know what other market towns or similar-sized towns have installed water fountains,” she said. “There have got to be grants available to enable us to do this.”

Mr Thomas suggested asking manufacturers where they had installed them.

Mayor Kellie Hinton said: “The idea of having water fountains is great but I find myself wondering how many parents are going to let their kids use them.

“We’re going to have to change people’s mindsets about water fountains.”

Mr Thomas replied: “There are always going to be risks with having something uncontrolled in a public area. People can use it not for drinking but perhaps washing their hands.

“People do have concerns about these kinds of things. Some of that comes down to the design of the fountain and making sure the nozzle is shielded from direct contact.

“Also you would need to maintain your fountain so that it’s something that is kept shiny and bright and appealing.”

The pair have asked hotels and cafés and other businesses if they would be willing to offer visitors free tap water to refill their bottles.

Businesses that agree display a window sticker stating “Free tap water available here” and are included in the Refill app, which has a map of participating businesses across the country.