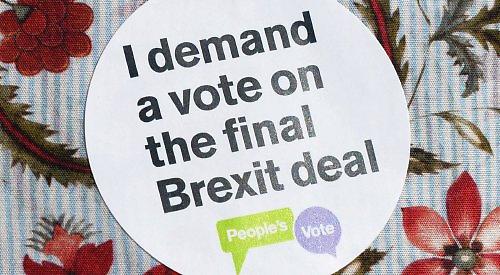 A DEMONSTRATION calling for a public vote on the terms of Britain’s withdrawal from the European Union was held in Henley.

About two dozen people took part in the event in Market Place on Saturday, which was organised by Shiplake resident Will Stevens as part of the nationwide Open Britain campaign.

The protesters placed the flags of the EU and other member countries in planters or carried them in backpacks while waving placards with slogans about their cause. They also set up a stall and distributed badges, stickers and leaflets called “Brexit’s Breaking Britain”.

Members of the group, who came from across South Oxfordshire and Buckinghamshire, also set up a “Brexitometer” using a magnetic whiteboard allowing passers-by to vote on whether they still supported Britain’s departure. Thirty out of 152 respondents, or just under one-fifth, were in favour of pulling out while the remainder opposed it.

Mr Stevens, 71, came up with the idea after discovering Open Britain had been launched in Thame. The organisation, which was founded shortly after the referendum in June 2016, wants Britain to remain part of the European single market.

The Henley “action day” was one of about 200 taking place across the country to promote the launch of Open Britain’s People’s Vote campaign.

Mr Stevens said: “We don’t just want another referendum, although we would like to offer the option of remaining.

“It’s about whether the terms being offered are acceptable — whether we should leave the single market, the customs union, the European Courts of Justice and all the agencies we’re closely linked with and will have to run ourselves if we leave. It’s important to ask whether people still think Brexit is a good idea because the Prime Minister doesn’t appear to. We’re already starting to see the damage with things like the job cuts at Jaguar Land Rover, so we’re getting a lot of pain with no evidence that any benefits are coming.

“We had a lot of interest, especially from Europeans worried about their status. Many people said they’d changed their minds about Brexit since 2016.”