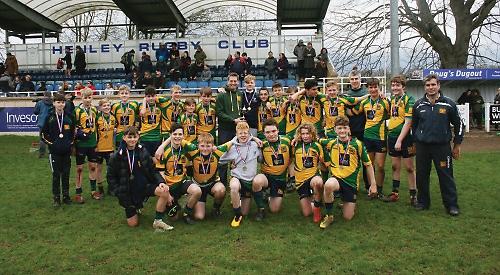 HENLEY U14s were crowned Oxfordshire county champions after a cup final victory over Banbury at Dry Leas on Sunday.

For the first 15 minutes Henley had to weather a barrage of attacks, conceding turnovers and were unable to establish parity in the scrum.

After absorbing Banbury pressure, Henley managed to venture into their opponents’ half and, after a number of attacks, finally broke through their defence after a deft pass from Perez-Quane put Bush over in the corner for an unconverted try.

But Banbury hit back and despite repelling multiple drives, Henley eventually conceded a short range try under their posts, which was converted to give them the lead at the interval.

In the second half Henley increased their physicality and a quick pick-up from a breakdown saw Trinder step back inside and beat several players to touch down under the posts but was unable to convert his own try.

By moving the ball from one touchline to the other Henley stretched the Banbury defence to breaking point and eventually Bush found a line and a pop pass that took him under the posts to secure his brace, which again went unconverted.

Banbury threw everything they had into the last five minutes and desperate defending resulted in several Henley infringements leading Banbury to force their way over out wide. Their attempt at a quick drop-goal conversion was missed, which meant Banbury needed a try to win. With a minute to go, Henley returned the ball long and defended until they were awarded a penalty. Time was up and the ball was kicked out to end the match.

After the match, all squad members received a medal from Rob Walsh, president of the Oxfordshire RFU.