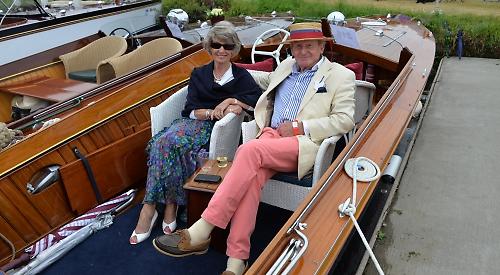 THE Thames Traditional Boat Festival will celebrate its 40th anniversary this summer.

The largest gathering of traditional river craft in the world will be held at Fawley Meadows from Friday to Sunday, July 20 to 22.

There will be vessels ranging from coracles to Edwardian steam launches and Sixties film stars’ toys.

About 30 Dunkirk Little Ships will make an appearance, along with dozens of amphibious vehicles.

Visitors will be able to set foot on most of the boats, whose owners will be vying for the annual awards.

Gloriana, the Queen’s row barge, will be on display and there will be a competition to win a place on board as she is rowed out by various teams during her stay at the event.

Sir Malcolm Campbell’s 130mph world-record breaking speedboat Blue Bird K3, will be returning. In 2015, there was a small engine bay fire that halted its run along the Thames.

Hobbs of Henley will offer a free ferry service from the station for visitors with pre-booked tickets and at least one large steamer, Alaska, will provide river trips during the festival. On land there will be a large collection of vintage cars and bicycles and shops selling crafts, clothes and jewels.

There will also be jumble and antiques for sale. Entertainment will be provided by roving musicians and a Punch and Judy show.

The Crooked Billet pub in Stoke Row will provide food along with music at lunchtime and in the evenings. There will also be a range of street food stalls.

A members’ enclosure will offer a dedicated service from the Crooked Billet, a concierge service and other perks.

For the first time, the festival will feature an auction of 50 lots of transport-related memorabilia, which will go under the hammer on the Sunday. Thomas Plant, director of Special Auction Services and expert on the BBC’s Bargain Hunt, will be on the rostrum for proceedings.

Parking is free and visitors can pre-book to camp on site.