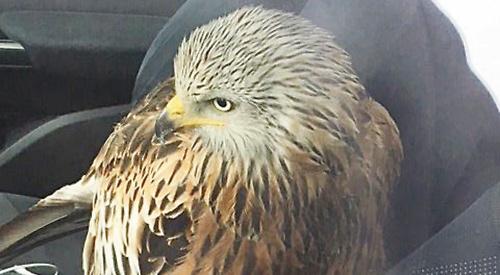 BBC journalist Matt Graveling may have regretted stopping to help an injured red kite when it woke up on his car’s passenger seat.

Matt, who works for South Today, was driving towards Henley to film on location when he spotted the bird of prey unconscious by the side of the road after being struck by another driver.

He picked it up and placed it on his front passenger seat and continued his journey.

However, about 15 minutes later the kite suddenly came to, forcing him to stop and swiftly evacuate the car.

He went into a nearby garage, where he called the RSPCA but then had to wait three-and-a-half hours for someone to come — still unable to get back into his car for fear of being attacked by the “angry” bird.

He said:  “After about 15 minutes of driving the bird started to open its eyes and ruffle its feathers.

“Then all of a sudden it stands up on its legs on my passenger seat — this bird came up to my shoulders and looks over at me.”

Matt said its beak and talons “looked like they could do some damage” and, of course, a red kite’s wingspan can reach up 70in.

An RSPCA officer took the bird to a specialist vet give it fluids. Matt said: “One of the bird’s eyes was injured due to being hit and that could well be its downfall because they need perfect vision in order to hunt.”

Matt admitted his car was a “bit of a mess” with droppings afterwards,

He shared his story on Twitter, where it has been retweeted more than 7,000 times, saying: “Wow — that bird tweet went a bit crazy.”

Matt added: “I think my favourite thing to come out of this is how many other people are posting their own animal car share stories. It’s nice to know there are still those who would welcome an injured animal into their car, even if they know it will most likely end up pooing on their seats.”

As the saying goes, no good deed goes unpunished.