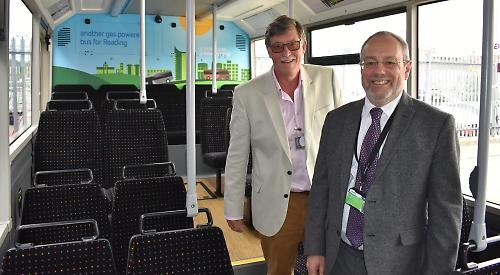 A NEW bus service will begin in Henley in July using a “green” vehicle.

The town council is expected to agree a deal with Reading Buses to take over the routes for the town centre from Whites Coaches.

The hours could be extended further if the service proves to be popular.

Councillor Stefan Gawrysiak, chairman of Henley Town Council’s bus working group, said the bus would be powered by biomethane gas so would be carbon neutral.

This will help reduce he air pollution problem in the town, where some streets have levels of nitrogen dioxide that are 50 per cent higher than Air Quality England’s target limit of 40 micrograms per cubic metre.

The new bus will be a single-decker with about 33 seats which has been refurbished and will have new livery.

Councillor Gawrysiak said: “It will not emit particulates, which are a big issue in Henley, and will be environmentally friendly.

“That was one of the drivers for this process and one of the main reasons we have chosen Reading Buses.

“One of the other reasons was the community aspect and we talked about the quality of the company’s drivers. Many of the people who use the bus service are elderly and we need to be sure they are going to have a reliable service and a driver who is friendly.

“We are working in partnership to improve the patronage. The service could become commercially viable in the next three to five years.”

Tony Pettitt, chief finance and information officer for Reading Buses, said: “We are delighted to be the preferred bidder and we are looking forward to the opportunity to develop the service.

“We see it as a long-term partnership to help encourage people to use public transport when getting into and around Henley.

“We have operated services to Henley previously and it was something we wanted to re-establish.”

There were three bids for the contract. The others were from Whites Coaches and the Oxford Bus Company.

The town council has been subsidising the current services since Oxfordshire County Council withdrew all its bus subsidies in a cost-cutting measure in 2016.

The routes do not make a profit so would have folded without the support. The council will continue to pay £1,500 a month until the end of June when the Whites services end.

The subsidy for the new service is being paid with section 106 developer contributions from developers building houses at Highlands Park and Greys Mews, both off Greys Road, and the former Wilkins Yard in Deanfield Road.

The new service will have new stops, including Townlands Memorial Hospital, the station and Highlands Park once the new houses there are occupied.

Some stops will have electronic timetables which could be rolled out to them all.

The service will also run to and from Reading at the start and end of the day and will be cleaned at the end of each day.

The app can be also used to pay for tickets but smartcards, contactless, cash and bank cards will also be accepted.

Mr Pettitt said the company hoped to make the service commercially viable in the next five years.

He said: “The council is providing a subsidy but we aim to grow the market for it in the next year and then provide it on a commercial basis.

“We will be looking to attract customers from different markets and other demographics. We want it to be attractive for people who do not currently use it.

“We have a track record of taking services on from other operators, adding a bit of sparkle and attracting new customers. It’s about providing information and a coherent strategy. Each service has a local brand.”

Mr Pettitt said a small team of drivers would be allocated to the Henley route so they could get to know regular passengers.

He added: “We will make provision for any driver breaks, meal breaks and changeovers, which will all happen in Henley rather than the bus going back to Reading.

“We trust our drivers to do the right thing. We ask them to use common sense, be safe and legal but do what is necessary to provide the services and get people to where they need to be safely.”

Town councillor Donna Crook started a petition to retain Henley’s bus services more than two years ago when the subsidy cuts were announced. More than 2,000 people signed it.

Councillor Crook, who won a
by-election in January, said: “I am very happy with the new service and it will be much improved. More people are going to use it.

“We need to thank to 2,000 people who supported the petition to save the buses as without them we would not be where we are now.”

Reading Buses, which operates under the company name of Reading Transport, is owned by Reading Borough Council. It has an annual turnover of more than £35million.

The decision to award the contract to Reading Buses is expected to be rubber-stamped at a council meeting on Tuesday. It has already been signed off by the bus working group and the finance strategy and management committee.

Once the service has started the council and the operator will meet every two weeks to review progress and resolve any problems.