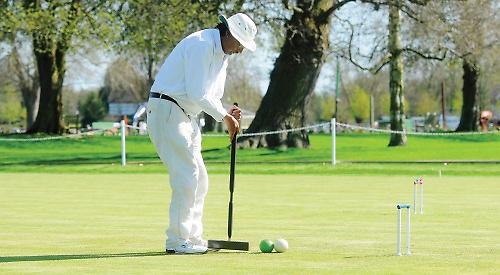 PHYLLIS COURT CLUB in Henley defeated All England Club, Wimbledon, 7-5 in their first friendly fixture of the season on Wednesday last week.

The match featured both Association and Golf Croquet on adjoining courts on what was the hottest day of the year so far.

The AC half of the fixture, which was drawn 2-2, saw the Phyllis Court debut of Raouf Allim, who joined the club in the winter from High Wycombe.

Richard Peperell got the hosts off to a good start in the morning and the Frances Colman and Chris Roberts combination secured the draw in the afternoon.

Raghu Iyer led the Phyllis Court team to a 5-3 victory in the Golf Croquet doubles half of the overall match which featured ever changing partners. They began well, winning the first three games, only to be pegged back, so needed two wins in the last round.

Iyer teamed up with John Maguire for the first win, and Dianne Brown, now playing at a more measured pace, brought home the victory with partner Colin Morgan.

Meanwhile, at the top draw golf croquet Surbiton Open last weekend, Phyllis Court’s Roger Goldring sprang a real surprise on Saturday, when he recorded seven wins from eight games, which was the best of the entire 24-player field.

Having originally missed out on the national ranking-based selection for this tournament, Goldring came in as cover for an 11-hour withdrawal and soon had the more fancied participants, not only sitting up and taking notice, but avidly longing for a slip-up from the leader.

Clubmate Ian Norris was just one win behind Goldring after the first eight games, whilst the highest ranked of Phyllis Court’s entrants Chris Roberts had a poor first day.

However, fortunes were reversed on Sunday when three more rounds completed the group games and a further round decided final places.

Goldring and Norris failed to add to their overnight tallies, but Roberts recovered well to defeat them both to finish seventh, ahead of Goldring in eighth and Norris 10th.

This weekend, Roberts and Goldring are joined by Helena Fensome at the Sidmouth Open, which is a qualifier for the
English National Singles Championship finals.