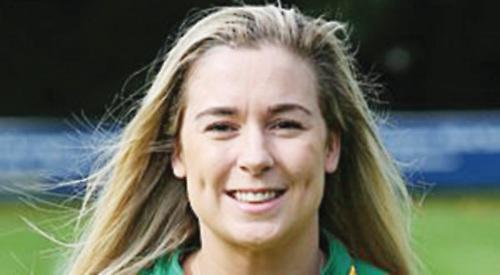 THE captain of Henley Hawks Women has stepped down and retired from playing after 14 years with the side.

Carly Dudding was due to make her 150th appearance last Sunday but the final game of the season was called off when Plymouth failed to raise a team.

The 29-year-old admits she is “gutted” not to have taken to the field one last time but says she is leaving on a high.

She said: “I think I can say that this is the best team I have played with in 14 years at the club.

“It is the right time for me to step back, finishing third in the championship, which is the best we have done in recent years, and 149 caps. I’m really pleased.”

Dudding began playing for Henley at the age of seven after she told her father Nigel, the club’s current director of rugby, she wanted to have a go.

She explained: “Both of my brothers played rugby and I would watch them. I asked my dad if I could play and he gave me one of their kits and I was put on.

“I used to do ballet on a Saturday and play rugby on a Sunday. In the morning I would play for the minis and then I would be a ball girl for the women’s team in the afternoon.”

As Henley didn’t have a girls’ side Dudding then moved to Chinnor to play for them and after a year she was made captain.

But she always wanted to play for Henley and, aged 15, she made her comeback with the women’s side in the Premier Division.

Dudding recalled: “I was playing with and against England players. I started playing on the wing and I think I was quite a confident player. It was quite a step up but the players were brilliant and looked after me.

“It was very scary playing against the likes of the Saracens and Richmond but there were big opportunities open to me, playing with the likes of Rocky Clarke, Danielle Waterman and Rachael Burford, who play for England.”

Over the years the Hawks Women had dropped out of the top league and have at times found it difficult to keep hold of players and once went through a league campaign without a coach. More recently they have enjoyed much success, including going the entire 2014 season unbeaten.

Dudding, who works as a PE teacher at Wallingford School, is married to Jim Hadfield, who plays for the Hawks men, and they live in Sonning Common.

She says playing rugby at Henley has been one of the best things she has done, adding: “Rugby gives you everything you could ask for from a team sport. Henley is a social, inviting club and people who go there love it.”

Tributes have been paid to Dudding by her coach and former teammate.

Henry Day, head coach of of Henley Hawks Women, said: “Carly has been at Henley Rugby Club since a child and has led by example for years and in every game puts her body on the line for the team.

“A leader who never takes a backwards step who has been with Henley through the leagues. A pleasure to coach and we hope she will continue to support the coaching staff at Henley Rugby Club.”

Rochelle (Rocky) Clarke, who has 129 caps for England, said: “Carly has been an incredible stalwart of the game for many years. She has been a true club player and deserves all the recognition she will get.

“Her fantastic attitude and friendly nature has made her a natural leader of the Henley ladies team, with countless player of the match performances to go with it. An all round great person and top rugby player, she’ll be missed from the game.”