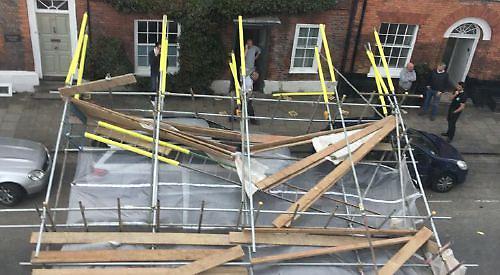 NEW Street in Henley was blocked for an hour and a half this afternoon after scaffolding collapsed.

The structure, which had been erected in front of a house a short distance from the Kenton Theatre, toppled across both lanes at about 3.10pm.

A gust of wind is believed to have caused it to fall and one workman still on the structure was forced to leap to safety.

He and two other men had been painting window frames on the first floor of the property.

Witnesses said the victim injured his foot and was in a state of shock so was taken indoors to recover by neighbours.

Residents including former Olympic skier Graham Bell redirected traffic at the junction of Bell Street and New Street until the police arrived a short time later.

There was congestion on Northfield End and the Fair Mile as far back as the Assendons, with motorists reporting lengthy waits. Contractors from Dockers, of High Wycombe, which put the scaffolding up, had dismantled it by 4.30pm with the help of police officers.

A scaffolding pole pierced the windscreen of a Mercedes estate parked beneath it and shattered the window a Renault Clio. Both cars are believed to be owned by residents.

The owner of the property had been alerted by neighbours and was on her way to the scene.

For the full story see this week's Henley Standard.