Hawks have no answer to Rams in final day defeat 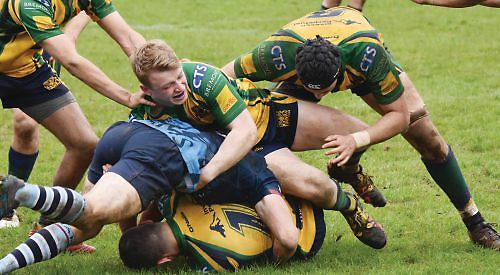 HENLEY HAWKS suffered their fifth successive defeat when their local rivals outplayed them in every aspect of the game at the Old Bath Road last Saturday with exception of their own line-out throws.

This was the climax of a miserable season with the home side scoring eight tries to which the Hawks could not muster a response and in truth did not at any time in the game hint that they were likely to do so.

Playing against the slope the opening exchanges were constantly in the Hawks’ 22 metre zone. The Hawks response to the ensuing pressure was to attempt to run the ball against a determined defence with handling moves breaking down frequently.

Despite this they pursued this plan which has become common knowledge to their opponents as the season progressed, not least the Rams, whose coaching staff and players have been in their ranks in recent times. Kicking to relieve pressure was certainly not part of the Hawks’ game plan.

Within three minutes of kick-off Rams hooker Ben Henderson was able to cross the whitewash for an opening try and although Adrian Jarvis sent his conversion attempt wide he quickly converted a penalty after 24 minutes to put the home side 8-0 in the lead.

The Hawks were, under pressure, prone to give away penalties but Rams running with ball were decisive and swift and it was another ex-Hawks player, Connor Corrigan, who used his pace to extend his side’s lead to 15 after 29 minutes stretching the Hawks’ tackling ability.

In the approach to half-time Redingensians’ attacking pressure led to tries by strong running centre Ellis Jones and elusive scrum-half Miles Lloyd both converted by Jarvis which gave the Rams a comfortable 29-0 lead helped by the award of a yellow card to Hawks’ hooker Tom Emery.

The Hawks had the advantage of the slope in the second half but any benefit to them was quickly dispelled as fullback Joe Duffelen came storming through after just 10 minutes for a try to make the score 34-0.

The Rams were now rampant and the Hawks suffered the indignity of conceding a try when, on a rare occasion of being close to the home line in possession, only to lose the ball for the home side to race to the other end with a good move to burst through for centre Steve Bryant to leave the Henley defence gasping. This was one of five second-half tries.

The final try by Ellis Jones saw the game come to an early end as a desperate tackle by Toby Howe to stop a score ended with the young player being knocked unconscious and needing urgent medical attention. Fortunately he recovered well enough to leave the field unaided but the referee considered that time was up and the game finished six minutes early but the final result stood as the match was played over the 60 minutes required.

• Last Saturday’s match marked the end of an era for Henley Hawks captain Dave Clements who played his final match before retiring from the game. Clements, who joined the Dry Leas outfit in 2008 from Wharfedale, has played in more than 200 matches for the Hawks during his 10 season with the club. The ex-Loughborough Students lock has captained the side over the course of three seasons, this time taking the place of Jake Albon who has been sidelined due to a hip injury.