Vultures swoop under the lights to secure county cup 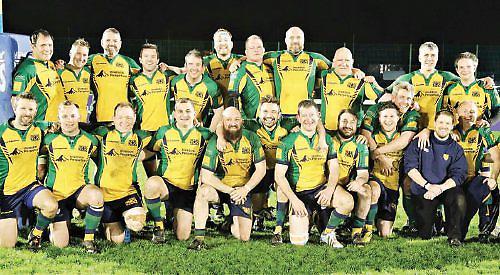 THE veterans side of Henley Rugby Club, the Henley Vultures, lifted the Oxfordshire Vets Cup at Dry Leas on Friday night of last week after beating Witney Vets 27-7.

The final of this year’s tournament had been eagerly awaited after Witney heavily defeated an established Chinnor Vets side in their semi-final encounter. The Henley Vultures eased past Wheatley without conceding a point in the other semi-final and had two debutants in the team in the shape of former Hawks captain Tom Allen playing at fly-half and former Northampton Saints winger Ed Binham for this clash.

Binham wasted no time getting on the score sheet after just three minutes. Showing his pace, he beat his opposite number to the try line to touch down a well taken opportunity. The conversion was unsuccessful from Vultures captain Anthony Campbell.

This spurred Witney on who delivered throughout the game, a direct and hard running style which tested the Hawks resolve in the tackle and at the breakdown.

Witney were happy to press hard in defence and then capitalise on the quite frequently handling errors from the Vultures who were trying to play an expansive game with a slippery ball in hand.

Man-of-the-match Tom Allen showed good vision and a turn of pace from outside the 22 to glide in for Henley’s second try which Campbell duly converted.

A third try followed for Will Spriggs a few minutes afterwards, as he finished well in the left-hand corner. The conversion was unsuccessful from the touchline. The contact area was hotting up and the tackles were flying in as Chris Darke was shown the yellow card for an illegal tackle which appeared to have been made by team-mate Matt Payne. The Vultures went in at half-time 17-0 to the good.

Witney started the second half with more direct running from depth which the Vultures had to hit hard on the gain-line. Spriggs managed to get his second try of the night whilst the forwards were going toe to toe. More yellow cards were shown by the referee which resulted in the Vultures being down to 12 men for a period in the second half.

Witney pushed hard in this period and found a gap in the Henley defence to score a try through Tustin which was converted by Strutt. In the final quarter of the match, Henley and Witney made lots of personnel changes to ensure all the team members got in on the action on the night. Fittingly Allen scored his second try of his debut Vultures game, going over after good pressure from the Henley forwards in the Witney 22.

When collecting the cup captain Campbell made a special tribute to Simon Priestley, a cornerstone of the Vultures team, who sadly passed away on the pitch in January this year.