‘No alternative’ to housing at former garden centre site 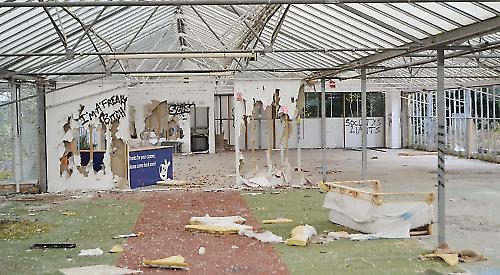 PLANS to transform a derelict garden centre between Henley and Shiplake into homes and offices could go ahead after councillors agreed it was the only viable option.

Aida Dellal, who owns the old Wyevale site, off the A4155 Reading Road, wants to build up to 40 new homes plus some commercial units.

The 4.5-acre site is earmarked for commercial use in the joint Henley and Harpsden neighbourhood plan but Mrs Dellal says that is not viable.

She says the development would help alleviate the shortage of housing across South Oxfordshire and the site is “particularly well-suited” to housing as it sits on a major bus route between Reading, Henley and High Wycombe and is within walking distance of Shiplake station.

She says there would be no “significant” or “demonstrable adverse effects” as the land is brownfield and doesn’t fall within the Chilterns Area of Outstanding Natural Beauty.

Henley Town Council’s planning committee supports the application, subject to conditions. It wants a study carried out on the effect of the development on traffic using the A4155 and has requested cycle and footpaths linked to Shiplake and Henley.

Councillor Stefan Gawrysiak told a committee meeting: “We should approve this but there should be heavy emphasis on our conditions.”

Councillor Jane Smewing said: “I think we have reluctantly accepted that there is no alternative. We know there is an issue of viability.”

Nearby residents are concerned about the size of the development, the extra pressure on services and additional traffic.

Emer Bollinghaus, of Mill Lane, Shiplake, said: “It is well documented that the A4155 is a very heavily congested and dangerous road. Adding more houses at this site would only make this problem worse.

“It would be much better to provide some employment opportunities, to keep some traffic out of Henley and to prevent further suburbanisation of Shiplake.

“It might even be an opportunity to provide a car park for car sharing and/or park and ride facilities into Henley to help ease traffic congestion on the A4155.”

David Brough, of Gillotts Hill, Harpsden, said: “I would like to see sustainable developments. By this I mean developments that can support roads, schools, medical services etc and keeping the space between Henley and surrounding villages intact.”

The NHS Oxfordshire Clinical Commissioning Group has objected due to the pressure that extra housing in South Oxfordshire is placing on the health service.

The site has been unused since 2009 when the Wyevale garden centre closed and is next door to Thames Farm, where planning permission has been granted for 95 homes.

The development would include 28 houses and 12 flats. At least 40 per cent of the units would be “affordable” with the rents or sale price fixed below the market rate. There would also be 76 parking spaces, a “village green” and office space.

South Oxfordshire District Council will make a decision by June 19.