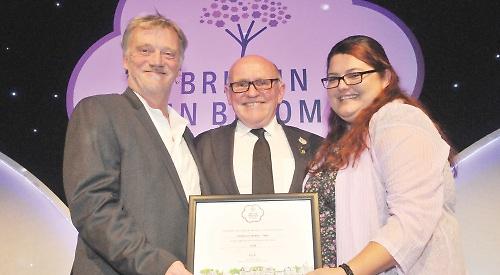 A MAN described as the “heart and soul” of Henley’s green spaces has died, aged 53.

Gareth Bartle was the head of the town council’s parks services team and was responsible for maintaining public spaces such as Mill and Marsh Meadows and Makins recreation ground as well as the council’s outdoor equipment, machinery and vehicles.

He had worked for the council for about 14 years and played a key role in supporting Henley in Bloom.

The town won six consecutive gold awards in the town category of the Thames and Chilterns regional competition and in 2015 scooped its first Britain in Bloom gold at the third attempt and silver in the Entente Florale competition.

It was these results that spurred Mr Bartle to become a judge for Britain in Bloom and the Green Flag award, which is the benchmark standard for publicly accessible parks and green spaces in the UK.

Henley Mayor Kellie Hinton, who chairs Henley in Bloom said: “Gareth Bartle was the heart and soul of Henley’s open and green spaces. He was such an influential person, so creative and such a visionary for Henley in Bloom.

“Although we have had time to come to terms with Gareth’s illness over the past six months, the sudden loss has winded us all.

“Gareth had an impact on so many lives. He was parks services manager but we really did get so much more than somebody who just managed a parks department.

“Everybody who speaks of Gareth talks of how he helped them in some way — always under the radar — working with schools and residents.”

Councillor Hinton said she would miss her “dear friend” with whom she could share a joke.

She said: “Gareth might have joked that I talked too much but he was always willing to listen and advise anyone who needed him, including myself. The loss of Gareth as part of Henley Town Council shouldn’t be underestimated.

“There will be a transitional period while we learn to adjust to a new way of working with perhaps a little less sparkle and cheekiness.

Mr Bartle was born on August 2, 1964 and grew up in Woodcote where he attended Langtree School before moving on to The Henley College.

He then studied countryside management and conservation at Aberystwyth University.

After graduating he held a number of jobs, ranging from land surveyor to dispatch rider to care assistant for people with learning disabilities, before joining the town council.

He lived in Pangbourne with his wife Janet and their children Ethan, 18, and Corinna, 15.

Mr Bartle was diagnosed with terminal lung and brain cancer in October. Despite the odds, he improved with treatment and continued to work until only recently.

He passed away at the Sue Ryder hospice in Nettlebed on Friday, surrounded by his family.

The family would like to thank everybody for their support and ask that instead of sending flowers, donations can be made directly to the hospice or Cancer Research UK.

Alternatively, people can sponsor Corinna, who will be taking part in the Reading Pretty Muddy 5k on July 14. Visit http://fundraise.
cancerresearchuk.org/page/
corinnas-race-for-life-16