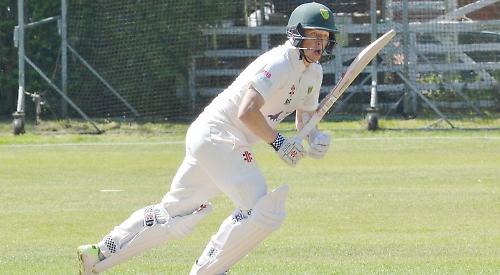 LAST year’s Home Counties Premier League champions HENLEY got their title defence underway with a clinical 84-run victory against BANBURY on a hot day at the Brakspear Ground on Saturday.

Despite looking like a match for Henley during the first quarter of the game, the visitors lacked a killer instinct in both the field and with the bat. Whilst Henley’s experience of knowing how to adapt to conditions and finding a way to be effective meant in crucial periods, they were able to outgrind their opponents for the win.

Having won the toss on a good wicket prepared by groundsman Charlie Jacobsen, despite recent inclement weather, Banbury skipper Lloyd Sabin won the toss and elected to bowl.

His decision was quickly vindicated as opening bowler Taylor trapped skipper and last season’s leading run-scorer Michael Roberts lbw for 11. Rowe was joined at the crease by Woods, who spent his winter performing for the England U19s and Sturt DCC in Adelaide, but the partnership did not last long as the latter nicked Beer off to Haupt at first-slip for 9.

At this stage Banbury looked set to embark on an upset, with some competent new ball bowling matched with good intensity in the field. However, as Morris played himself in, both he and Rowe began to look more at ease, adapting to the slow and tacky conditions and putting on a patient batting display.

The score had reached 83 when Rowe, now Cornwall captain and settling into his fourth season at the club, edged a cut off spinner West to the keeper for a well-compiled 33, which in the context of the game was of far more value than the numbers suggest. His dismissal meant Henley debutant Andrew Rishton entered the fray, who quickly showed what an addition he will be to the dressing room. Having reached 20 in quick time, he followed Morris’s example and adapted his batting to ensure their patient partnership began to turn the pressure back on Banbury, whose energy was beginning to be sapped as the latter part of the innings ensued.

Both batsmen picked their attacking options and it wasn’t long before Morris, having passed 50, began to accelerate through the gears, taking advantage of a tiring attack. He looked set to make his first century of the summer before missing a straight ball from Banbury’s overseas Adams, departing for a proficiently compiled 80.

Rishton worked with the rest of the middle to lower order to guarantee Henley exceeded a par score as he passed 50 in the process.

Thanks to some good shot selection and running between the wickets by Barnes, Brock and debutant Mike Williams, Henley finished on 241-8, batting out their full 50 overs.

On the resumption of play, Banbury appeared to bring a similar lethargy from the last 10 overs of their bowling display into their

batting, as openers Sabin and Haupt made leisurely progress to stave off openers Nugent and Afridi.

The new ball had undoubtedly become the best time to bat and although the visitors reached 50 for no loss Henley still had the spin quartet of Singh, Rowe, Woods and Brock yet to bowl.

Haupt was the first to depart, trying to hit Rowe over the top only to be stumped by new 16-year-old wicketkeeper Williams filling the large shoes left by Stewart Davison. Next to go was Hill, who looked well out of his depth, bowled by Rishton whose bowling display earned him figures of 6-0-18-1.

After Rishton’s spell, the game quickly started to deteriorate for the away side, as Gurveer Singh put on a good display. With Rowe bagging Adams at the other end, caught by Brock at short cover, Singh proceeded to rip the heart out of Banbury’s line-up.

He firstly accounted for Sabin, caught behind by Williams, before bowling West and having Clarke caught by Barnes at mid-off. Rana was next out, clipping Singh to Woods at midwicket. Despite some lusty blows by Beer towards the end of the innings, which showed the top order what some attacking intent may have done, the innings quickly came to an end in the 39th over. Woods trapped Green lbw for 0, Singh bagged his fifth having Wright caught sweeping by Rishton at short backward square, before Brock wrapped things up by bowling Beer for a well-earned 34.

Skipper Roberts was happy with the result. Speaking after the game Roberts said: “It’s great to get off to a winning start obviously, but what is more pleasing is the manner in which we went about it.

“We spoke in pre-season about prioritising our attitude, giving our best effort to our skills and adapting to challenges quickly. We did all three to a high level today and if we can continue to stick with this, it will take us far both in the league and the national competitions.”

In relation to the new players Roberts added: “Both Mikey and Andrew showed today what brilliant additions they are to the changing room. Both bring energy and add value in their own way, on and off the field, and hopefully we can help them as people and players during this season and beyond.”