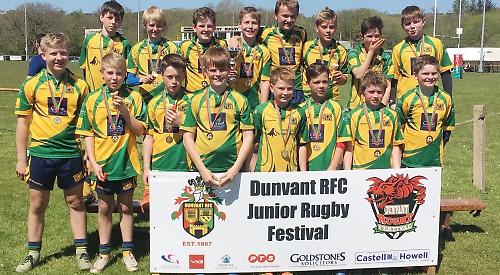 HENLEY Hawks U12s completed the most successful season at their level when they toured Swansea over the recent bank holiday weekend as they ended their campaign with 39 wins from their 41 matches played.

Following a fine showing in friendlies and festivals the Henley side went on to successfully win their own hosted tournament, runners-up to Rosslyn Park in the Land Rover Cup, crowned Oxford County Champions and were the guard of honour for England versus Australia match during the autumn internationals.

Over the bank holiday weekend the Henley side were tested against opponents from Vadre, Pontypridd, Dunvant and Cymafan from the Welsh valleys.

The Hawks side adjusted well to the different international rules — 15-a-side and contested scrums at U12 age group — where the tourists adapted quickly in the group stages with three victories and one narrow 2-1 defeat to a robust Pontypridd side.

As the tournament progressed the Henley side found a shot at redemption, again meeting Pontypridd in the final where the Hawks’ flowing rugby narrowly defeated a strong pack from their opponents to run out 1-0 winners after 20 minutes.