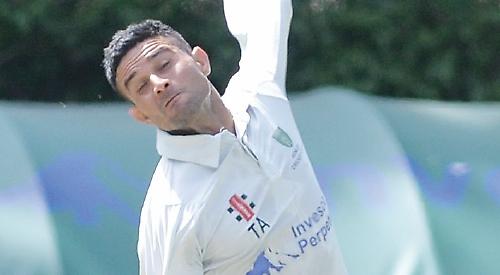 HENLEY had mixed fortunes last weekend with their Home Counties Premier League Division 1 clash at THAME TOWN being abandoned on Saturday before easing through to the next round of the national 40 overs cup at home to BEACONSFIELD the following day.

On Saturday Henley were without the services of captain Michael Roberts who was attending a wedding so paceman Tom Nugent took over as skipper and Tom Oldershaw moved into the opening batting slot.

Nugent’s captaincy career began inauspiciously when he lost the toss and Henley found themselves in the field. Matters then took a massive upturn when Thame were reduced to 10-4 after just six overs thanks to a devastating opening spell from Tahir Afridi and the captain. The score soon became 18-5 and 39-6 as a record low league score looked on the cards.

The introduction of spin relieved the pressure on the hosts and throughout the carnage Thame skipper Michael Beard stood firm and began to craft an innings of style and grit. None of the four spinners used bowled particularly well with Matt Rowe the pick of the bunch.

Beard was assisted in a seventh wicket stand of 77 by number eight Jeffcock who looked a class above many who had preceded him. Following his dismissal for 35, on the return of the opening attack, the Thame innings subsided to a final total of 160 aided by 21 extras of which 14 were wides.

Captain Beard was last out in the 48th over having made a major contribution with 74 runs.

Afridi with 4-35 was the pick of the Henley attack with two wickets apiece for Nugent and Andy Rishton while Rowe was the only spinner to take a wicket and a smart run out completed the set.

A total of 160 was never going to be enough to deter a powerful Henley batting line-up but with inclement weather threatening Henley lost opener Oldershaw playing back to a half volley from left arm spinner Higgs before a steady drizzle turned to rain and ultimately a downpour that caused the game to be abandoned at 4pm.

The following day a full-strength Henley side eased through to the next round of the national 40 overs competition.

Having won the toss, skipper Michael Roberts elected to bat on a flat wicket at Matson Drive. Both he and Matt Rowe then set about providing a platform for the home side to put a commanding total on the board. They had reached 71 fluently and without trouble before Roberts was caught down the legside, with Rowe quickly following suit caught behind – both dismissals off the bowling of P Stephens.

Woods and Morris quickly rebuilt and began to go through the gears. Morris’s dismissal off the bowling of Holmes, stumped for 21, did little to stop the momentum as Rishton joined Woods and both players scored freely despite Stephens’s best efforts, who returned figures of 8-0-39-4.

The pair put on 132 for the third wicket before Woods’s dismissal, well caught on the boundary by Odedra for 78. Rishton, along with the rest of the middle order, brought Henley up to 279-6 off their allotted 40 overs, with the Berkshire man finally being dismissed for 95 off 67 balls.

In response Beaconsfield never threatened the Henley total with Afridi taking three quick wickets leaving the middle order with it all to do at 19-3.

H Stephens and Barnett resisted the Henley attack for a short while but both could never really get going and despite some lusty blows towards the end of the innings from Holmes, the Buckinghamshire side were all out for 157 off 32.1 overs.

In the next round of the competition Henley will host Peterborough on
June 3.