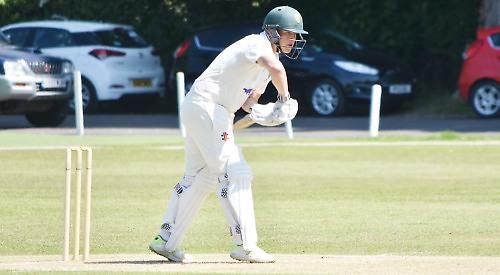 LAST year’s champions HENLEY suffered their first set-back of the season after a below-par batting display led to a disciplined and match-winning run chase by newly-promoted ASTON ROWANT last Saturday.

Despite Matthew Rowe and latterly Tahir Afridi showing plenty of application and effort, the much-vaunted batting line up of the 2017 champions failed to establish any meaningful partnerships, illustrating the fine line between winning and losing in the Home Counties Premier League.

Finishing 30-light of a competitive score, despite a fielding and bowling display full of energy, Rowant were always in command and got home in the penultimate over with five wickets to spare.

On a hot and sunny day at the Breakspear Ground, returning skipper Michael Roberts won the toss and elected to bat on what looked to be a good batting wicket. And so it seemed for the opening wicket at least, as Roberts and Rowe passed 50 without too much trouble, showing plenty of attacking intent and suggesting that 300-plus was for the taking. However Morrick, who returned figures of 10-3-18-1, struck in the nick of time, finding the edge of Roberts’ bat to leave the hosts on 55-1. Woods then joined Rowe and although never looking particularly troubled, the pair were unable to make their mark as a partnership.

Woods nicked spinner Moriarty behind for 23, leaving Henley on 97-2. Having only amassed 38 runs in 16 overs since the first wicket, Henley were a little behind the required rate on what was still a good wicket to bat on. With some good bowling and fielding by the visitors, combined with shrewd tactical acumen by skipper Smith, Rowant never really relinquished the upper hand. Morris fell cheaply, caught and bowled by Moriarty, before Rishton fell softly to Whatman, caught at point for 16.

The manner in which Henley failed to build partnerships ensured momentum could never be shifted and despite young Williams attempting to rebuild with Rowe, who continued passed his half-century, seasoned campaigner Whatman had him caught at long off before he could go through the gears.

Afridi provided some much-needed impetus and showed what could be done with some more attacking intent. However, with Rowe dismissed just a few overs later for a well-compiled and patient 78, Henley had to become wary about batting out their overs out. As such the tail could never really go at full throttle, leaving Henley 219 all out, two balls shy of their allotted 50-overs. Defending under-par scores successfully has been a hallmark of this Henley team over the years but this was always going to be an uphill battle. Nonetheless with Nugent striking in his first over, trapping Condon lbw for a duck, Rowant looked susceptible early on. Despite rebuilding, the away side lost their second wicket with the score on 62 and with a run rate of only three runs per over, meaning they would need to show a little more attacking intent to ensure a successful chase.

Smith and Reid combined well and did not let the home side control the game. Henley were also slow to adapt to a wicket which perhaps suited the slower bowlers, and it was only when Rishton began to take pace of the ball did the defending champions look threatening, with Reid, Coles and Moriarty falling in quick succession. The first two being picked up by Rishton, whilst the latter was outstandingly run out by Nugent throwing into Williams from fine leg. The game was finely poised at this stage, with Rowant on 137-5 and Henley sensing they may have had the upper hand. Morrick showed his experience and along with Smith, rebuilt patiently, combining some clever stroke play with the occasional lusty blow to the boundary.

The usually reliable Singh was never quite able to find his rhythm, whilst Woods couldn’t adjust his speed to suit the wicket, leaving Henley with limited options for finding a breakthrough.

Despite the best efforts of the returning Nugent, who finished with impressive figures of 10-3-27-1, Henley didn’t manage to find another breakthrough and Rowant surpassed Henley’s 219 with an over to spare.