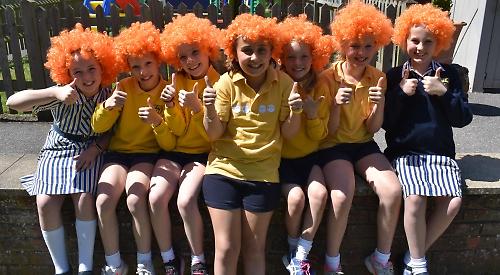 A SCHOOLGIRL from Henley raised £1,300 for a charity which supports people who suffer with severe allergies.

Lilian Graham, 10, took part in Orange Wig Day, which raises money and awareness for the Anaphylaxis Campaign. She suffers from anaphylaxis, a severe and potentially life-threatening allergic reaction affecting the airways, heart, circulation, gut and skin.

It was the fifth year she has raised money for the campaign and she has now raised more than £6,300 in total. Lilian was supported by her fellow students at Rupert House School in Bell Street and staff at Gabriel Machin butchers in Market Place as they wore orange wigs to raise awareness.

She said: “It’s good we have been doing it for five years and Rupert House are great supporters. It’s quite cool that my friends support me and we looks quite funny in the wigs.”

Lilian carries an EpiPen with an auto-injector containing a single dose of epinephrine in case she suffers an anaphylactic attack and needs emergency treatment.

Her mother Clare, of Northfield End, said: “The Government has agreed all schools can buy EpiPens as part of their first aid kits so they can be used rather than relying on someone having one. Lilian has two on her and there are two in the school office.

“The more people who understand the better.”