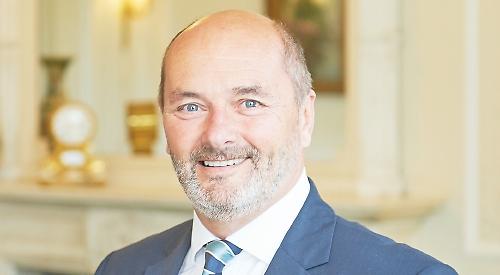 THE new chairman of Phyllis Court Club in Henley says he is looking forward to its £4million fitness centre being completed.

Barry Jackson, 69, who lives with his wife Jane in Phyllis Court Drive, was appointed at the club’s annual meeting and succeeds Patricia Christmas, who served for three years.

The fitness centre, which is due to open in September, is designed to attract new members to the private members’ club.

It will include a gym, 20m pool, exercise studio, sanarium, consultation and treatment rooms and changing rooms. The gym will be equipped with weights, rowing machines, cross trainers and treadmills and qualified personal trainers will provide members with customised fitness routines and nutrition plans while fitness instructors will hold group exercise classes, including Pilates and yoga.

Mr Jackson said the club needed to improve its offering, adding: “More and more people are getting to the point where fitness is more important to them.”

He said the centre would initially be open to members only but he hoped that in future members’ friends and family members would be able to use it too.

“A huge number of people has put a massive effort into this, including Patricia,” he said.

Mr Jackson, a consultant in the construction industry, will also oversee the implementation of a new IT system in August.

He said: “Members will be able to book for events, the tennis courts and exercise classes online.”

Mr Jackson, who has been a member for nine years, previously chaired the club’s membership committee and was then appointed to the board and became deputy chairman.

He said: “It’s an absolutely wonderful place to be. There’s the setting on the river, the food and the fabulous environment but when it comes down to it, it’s people, the good company.

“I will be doing my best to make sure all the members are getting what they want from the place.”

Mr Jackson, who moved to Henley from Sparsholt in Hampshire, will serve as chairman for a year as he has already been on the board for five years and the club rules allow a maximum of six. His deputy will be Stan Ainsley.