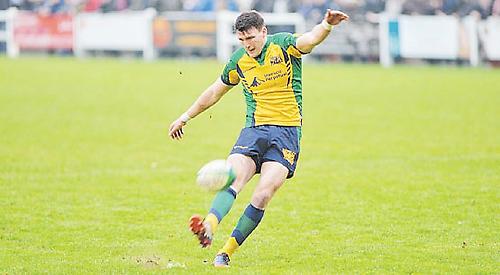 The 29-year-old has a rare form of blood cancer and has already undergone two bouts of chemotherapy since he was diagnosed in February last year.

He spoke about his condition as he presented a cheque for £4,500 to Cancer Research UK. The money was raised at a charity day to coincide with the Hawks’ home game against Canterbury at Dry Leas in March.

The Henley players, who wore pink shirts made specially for the occasion, all donated their match fee and before the game there was a lunch attended by 190 guests which included a raffle.

Comben, a fly-half, said: “It was quite an emotional day. It was nice to be back and to see the boys and raise all this money for a cause which is now very close to my heart.”

He was diagnosed with T-cell lymphoblastic lymphoma while recovering from a rugby injury.

He underwent eight months of chemotherapy before a scan in October showed he was clear. However, just days after Christmas his symptoms reappeared and he was told his cancer had returned. He had more chemotherapy followed by radiotherapy treatment which only finished recently so he is awaiting the results.

Comben said: “I’m edging closer to a stem cell bone marrow transplant, hopefully from my sister as she’s a match. There are 19,000 cases of lymphoma a year but there’s less than 100 of my type. Without Cancer Research, the survival rates would be nowhere near what they are. I’m benefiting first hand from what they do.”

He thanked his team-mates and club officials for their support, saying: “When you have had a rubbish couple of weeks, knowing you have got people behind you rooting for you lifts your spirits.”

Maria Gomez, the charity’s local fund-raising manager, said: “This is a fantastic amount of money and we’re so grateful. We’re entirely funded by donations from the public.”