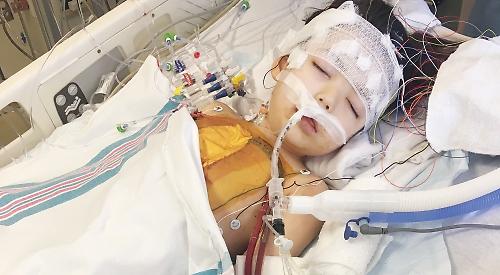 AN American girl who nearly died after undergoing heart surgery has visited Henley to thank the town for supporting her.

Doctors had to re-open her chest and keep her heart beating by squeezing it with their hands.

Iris was on a heart and lung machine for 11 days, during which time she was kept in a drug-induced coma as her body battled a number of infections.

She then underwent several more operations as surgeons fought to mend the damaged organ.

Iris finally came round only to suffer a stroke as a result of the blood-thinning drugs she was given to avoid clotting.

This initially affected her ability to walk and talk but after more than two months she was able to leave hospital and is now back to full health.

Throughout her fight for life, her father Karl, who is a friend of new Henley Mayor Glen Lambert, would post daily updates on Facebook.

Last May, Councillor Lambert decided to wish Iris all the best on Henley’s behalf.

He sent her family a copy of photographer Jim Donahue’s book A Portrait of Henley-on-Thames which was signed by Councillor Kellie Hinton, who was then mayor, with a message of support.

A year ago, Iris and her father, who live in New York state with her mother Kaori and brother Michael, nine, spent the May Day bank holiday weekend in Henley.

The youngster was guest of honour at the opening of the May Fayre and enjoyed a free boat trip on the River Thames courtesy of Hobbs of Henley.

She was also treated to a picnic lunch in the Mayor’s parlour with Cllr Hinton, who wore her mayoral robes and chain for the occasion.

Mr Helfner, an IT worker and former colleague of Cllr Lambert, says his daughter enjoyed her visit and hopes to return.

Iris was born with Ebstein’s anomaly, a condition in which the valve between the right atrium and ventricle in the heart is incorrectly positioned so that the blood doesn’t flow correctly.

After the initial surgery everything appeared to have gone well as she could speak and walk to the toilet.

But two days later her heart stopped. Doctors placed electrodes directly on to Iris’s heart and shocked it for 10 minutes in a bid to revive her but without success.

A team of about 20 medics then massaged her heart for 90 minutes in five-minute shifts until she could go on the heart and lung machine, which circulated her blood outside her body and infused it with oxygen.

However, the incisions in Iris’s heart began to tear and her chest filled with blood.

She had to be taken back to theatre so the swelling could be drained and new stitches applied.

Several more procedures followed to stem the bleeding before doctors realised her new valve was clogged by a blood clot.

They freed it up by inserting a special balloon and inflating it inside her heart but accidentally nicked a blood vessel in the process.

This was only detected when her lung collapsed a few hours later so she needed a second operation immediately, which carried serious risks.

Mr Helfner says: “The nurse practitioner was crying as she filled out the consent forms because one of the very real possibilities was death.

“She was usually unflappable but found this really hard to deal with. I was crying as well but I consoled her as I knew it was difficult for all of us.”

Over the days that followed, Iris remained under close supervision as she suffered a series of fevers.

Mr Helfner recalls: “The infectious diseases team were throwing everything at her because there was a serious danger of sepsis.

“They gave her all kinds of antibiotics and antifungals because they couldn’t afford to let anything develop into a full-blown infection.

“The woman who was carrying out Iris’s ECG tests had known her since she was one and was finding it so difficult that she couldn’t bear to look at her. It was tearing her apart and she told me ‘today is the day I question my career choice’.”

Thankfully, Iris’s condition stabilised and she was taken off the heart and lung machine on the 11th day as she had been bleeding overnight due to the blood thinners.

Mr Helfner says: “I was prepared for everything up to that point but this was terrifying because it’s not normal to take people off a machine on a Saturday morning when there isn’t a full complement of staff.

“It could have gone either way and we were in our own mental hell waiting for the news. Every time a doctor came into the waiting area we’d look up to see if it was for us.

“Eventually the surgeon came in with a massive smile on his face and I just hugged him.

“One nurse told me, ‘I don’t normally use the word miracle because we see all kinds of amazing things but your child is a miracle.”

Despite this and the stroke Iris suffered later she experienced no brain damage and is now back at school, where she is performing above the academic standard for her age group.

Cllr Lambert, who read the family’s online updates every day, says: “We knew Iris had well-wishers all over the world so I thought it would be nice for her to know Henley was behind her.

“In one of Kellie’s first acts as mayor, she wrote a message saying it would be lovely to meet Iris one day and it’s great that it has finally happened.”

Cllr Hinton says: “I don’t think any of us expected Iris would be able to visit so soon after everything that happened.

“I thought it would be wonderful if she could visit one day but realised it might not be possible.

“I’m so glad that we could welcome her. It’s was if the sun was shining for her — or perhaps she brought it with her!”

“It was wonderful to know that so many people around the world were supporting her. It gave us hope, which is all we had while she was going through the worst of it. She is one tough little girl.

“She really enjoyed her time in Henley. I’m sure she’ll want to come back and perhaps she’ll be doing Henley Royal Regatta!”