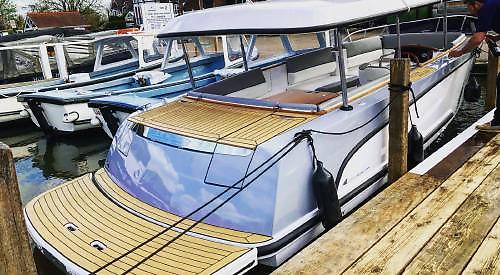 A NEW boat launched by Hobbs of Henley has been named after the year the family firm was founded.

The pleasure boat hire firm added the 31ft Alphastreet 23 motor launch to its fleet last month and held a competition online for people to suggest a name.

About 200 people took part and their suggestions were narrowed down to a shortlist before the firm chose Eighteen Seventy, which had been put forward by two people.

“There was one we liked but it had already been registered with the Environment Agency so we would have had to put a ‘two’ at the end of it.

“When two people put forward Eighteen Seventy, as a nod to the year we were founded, we really liked it. The boat is modern and luxurious but it reflects our founding days.”

Hobbs paid more than £45,000 for the vessel, which has front and rear adjustable seats and can comfortably accommodate eight people.

It has a unique, retractable hard-top roof which is operated by remote control for different weather conditions and also offers security protection. The boat also features a fridge, music system and a teak deck bathing platform.

Mr Hobbs said: “In the last couple of years we have been looking for boats that don’t look like they are boats for hire and have invested in more luxurious, self-drive launches. The Alphastreet is a new style of boat.”

Mr Hobbs is the great, great, great grandson of Harry Hobbs, who founded the business in 1870. Initially situated in Wharfe Lane, it moved to its current location in Station Road in 1898.

Hobbs has 57 boats, the largest hire fleet on the Thames, that range from rowing boats, self-drive and chauffeured launches and luxury motor cruisers to large passenger vessels for private and corporate events. The New Orleans, which was launched in 1991, is the largest passenger vessel on the Upper Thames.

• Your chance to win a half-day self-drive on Eighteen Seventy only in next week’s Henley Standard.