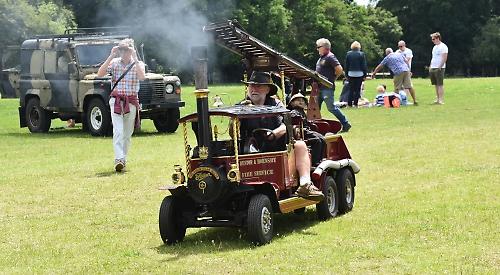 A NUMBER of celebrities were among the thousands of people who attended an antiques and architectural salvage fair over the weekend.

There were more than 60 exhibitors selling everything from old vehicles to clothing and furniture at the McAlpine estate at Fawley Hill.

It was an expanded version of the Salvo Fair, which was previously held at the estate but organiser Thornton Kay has taken a year off, and included antiques and textiles dealers. The new event was organised by Lady McAlpine, dealer Gary Wallis and Alix and Camilla Charpentier.

Lady McAlpine said about 10,000 had attended between Friday and Sunday.

“It was a howling success,” she said. “Everyone else is already talking about coming back next year, when it will be much bigger and better. I don’t know what we will call it but I will put my thinking hat on.”

Mr Wallis, who organised the trade stands, said: “It was incredibly busy. The number of people was higher than we had expected and several stalls recorded record sales.”

He praised Lady McAlpine for organising and hosting the event after her husband Sir William McAlpine passed away in March. “There was a lot to do and she did amazingly well to get it all off the ground,” he said.

Other attractions included old military vehicles, vintage cars and traction engines while visitors could ride on the estate’s steam railway. There was a private view with live music on Friday evening to raise money for Macmillan Cancer Care.

Lady McAlpine is also organsing the Thames Traditional Boat Festival, which will take place at Fawley Meadows from July 20 to 22.