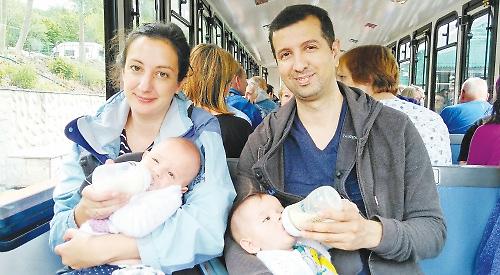 A MOTHER from Henley raised more than £1,200 for charity by running and walking from London to Brighton.

Jessica Hamer, 37, took part in the 100km challenge for the Sick Children’s Trust, which supported her and her husband Alper Ucar when their baby son Ethan was being treated for a heart condition.

She set off from Richmond Park with two friends at 9am and arrived at Brighton racecourse at 11am the following day.

The trio ran the first 30km or so before alternating with walking in order to save energy.

One of them dropped out at about 60km by which point they were walking most of the time.

Initially, they followed the River Thames to Kingston, then ran along pavements and public footpaths through London’s outer suburbs and into the countryside at Coulsdon in Surrey.

From here, they crossed the North Downs and proceeded into Sussex, eventually crossing the South Downs and reaching their goal via the steep hill at Ditchling Beacon. They crossed through woodland and open fields during the night, trudging through thick mud in heavy rain and thunderstorms.

The trek was part of the annual London2Brighton challenge so there were rest stops every 10km or so where they could drink water and eat high-calorie snacks to keep their energy levels up.

Dr Hamer, who lives in Luker Avenue and works as an education consultant, said: “It was so incredibly hard, not just because of the distance but because the weather was hot and humid with rain and thunderstorms.

“It was absolutely exhausting but we did it and it felt like such an achievement that I was on a high for several days afterwards. About one-third of participants dropped out but I desperately wanted to finish and I’m so glad I did.”

Rose was in good health but Ethan had coronary heart disease as the organ wasn’t growing as it should and he needed surgery to correct the defect when he was six months old.

Throughout the operation at Great Ormond Street Hospital in London, the Sick Children’s Trust gave the family a “home from home” room so they were only a few minutes’ walk from his bedside. Thanks to his surgery, Ethan can now live at home without medication.

He stayed at home with his father and sister during his mother’s trek and she was driven home afterwards by her teammate’s husband.

Dr Hamer said: “I was conscious that I had two little ones at home so I had to scale back the effort I was putting in to avoid injury. Mixing our running with walking allowed us to keep going without pushing ourselves too hard.

“We knew we had to be careful because there were St John Ambulance crews at every rest stop and the further we progressed, the busier they were getting. It was a constant reminder to be careful.

“There was a lot of suburban areas in the initial stages so the hard surface was quite tough on our knees. We saved our energy by only running on flat ground and walking up steeper slopes but by the end we were more or less walking all the time.

“The organisers were very good and put out lots of sugary and salty snacks for us. I think I ate seven bags of crisps just to keep my salt levels up as I was sweating so much!

“At one point I also had to stop for 45 minutes because I felt like I was going to faint and needed lots of water to rehydrate myself.

“Walking through the rain and thunder at night was something else because we couldn’t see where we were going and got lost several times. It felt pretty surreal.

“It was just a case of putting one foot in front of the other and not thinking about how much further there was to go. The final hill was exhausting, especially going downhill with all the blisters we’d picked up.

“I cried at the finish as it was such an emotional experience and I’d received so many text messages of support throughout the day.

“I had a glass of Prosecco, which was welcome, but then I slept all the way on the drive home.”

Dr Hamer, who had previously run in 5km and 10km events, trained by attending circuit classes and doing short runs in the week then running longer distances at weekends.

She said: “It’s hard fitting in the training with two small babies and you never fully recover from each session as you never get enough sleep. It was quite a juggling act.

“However, I’d promised to do something for the trust and felt obliged to keep that. These small organisations don’t always have the same budget as bigger charities but having that contact with caring and understanding people was so important at such a difficult time. It’s a level of kindness you don’t see every day.”