We’re not doing as badly as you think, says town manager 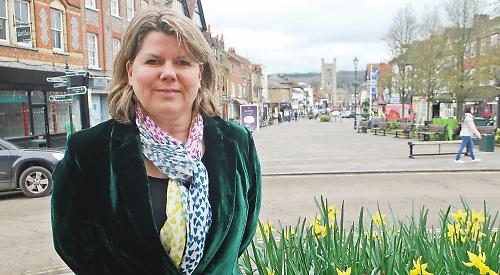 HENLEY’S high street is performing better than people give it credit for, says the town manager.

Helen Barnett says she is fed up of the negative picture being painted of the town when the number of empty shops is falling.

There are currently 13 vacant units but seven of these are under offer.

Five premises are currently being marketed by their agents and landlords while one is being redeveloped because it is uninhabitable.

Two other shops are unable to be let because they are part of the ongoing Gardiner Place development in Market Place Mews.

Ms Barnett, who has been in post since September 2016, says residents need to be more positive.

She said: “We have a 3.1 per cent vacancy rate, way below the national average of 11 per cent, and most of the empty units are under offer. It is not a picture that people like to paint of our town.

Ms Barnett presented the figures in a verbal report to a meeting of the town council’s town and community committee on Tuesday.

She said that work had finally begun on refitting the former Maison Blanc on the corner of Duke Street and Hart Street. The coffee shop, which has been closed since March last year, has been taken over by Harris + Hoole.

Ms Barnett revealed that there were three parties interested in taking over the Loch Fyne Seafood Bar and Grill which shut suddenly last month after almost two decades.

She also claimed that while shopping habits have changed, there is still demand for quality products and customer service.

Ms Barnett said: “Our vacancy rate is low but we need to improve our offer. Retail is changing but it is not all about buying things online, it is about having more of an experience.

“We don’t have footfall counters but I have spoken to several retailers who say that footfall is down but their profits are up year on year.”

Ms Barnett, a marketing expert whose role is to support the business community and increase footfall, said a vision for the town was needed.

However, this would only work if businesses and their landlords worked together with the support of residents.

She said: “You need to have a vision for the next 10 years, get everyone on board, including the landlords and the agents, and raise the bar. The retailers’ rates are ridiculously high.

“If you come at this from lots of different directions then you achieve nothing.

“It is about encouraging people who say we don’t have any shops to come here and shop.

“We have got so much going for us and we need to all work together to turn it into the best we can.

“Everyone compares us with Marlow but we have a lot more going for us than Marlow.

“What we need to do is tweak things and to put forward a plan.”

Ms Barnett believes Henley needs “a few” national chains to move in but often the shop units available aren’t big enough for them to consider while some are old and need refurbishing.

She said: “The retail landscape has changed considerably in the last 10 years and we have to be careful that we have the right kind of space.

“We have smaller shops and we need to attract a few national chains and more independents.

“We need variety but we don’t have those big units to attract those people. The problem is the actual space.”

Councillor David Nimmo Smith responded: “You have to have the right size of unit to attract people.

“Laura Ashley wanted to come to Henley for a long time before a unit of that size cropped up. I know of other national companies which want to come here.”

Councillor Sam Evans said that she had seen about six shops in the town centre having a refit, adding:  “It is fantastic to see those businesses take so much pride in how they look.”