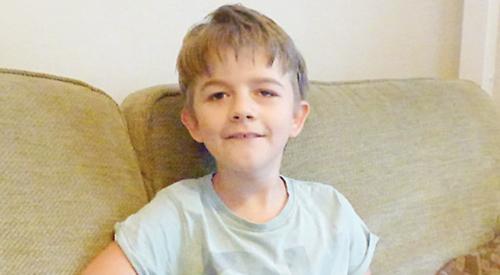 AN autistic boy from Henley has had his sight saved thanks to a specially made helmet and visor.

Thomas Hughes, 12, suffers from violent outbursts so extreme that he detached the retina in his left eye and now can no longer see out of it.

His parents Nick and Aneta asked the health service for help to ensure the sight in his other eye was protected but say they were told their son should wear boxing gloves.

However, after the couple contacted Newlife, a charity for disabled children, Thomas has been provided with a bespoke, specialist helmet and visor to protect his one good eye.

Mrs Hughes, who is his full-time carer and teacher, said: “Thomas doesn’t speak and has severe learning difficulties. The only way he can communicate is through a picture-based communication aid, so to lose his sight completely would be absolutely devastating.

“To be told to use boxing gloves when your child is at risk of severe damage to their head and eyes just isn’t acceptable.

“I was desperate when I called Newlife because of how dangerous the situation was for Thomas but they understood the urgency immediately.

“His tantrums escalate quickly and we try our best to hold his hands, which is what we’ve been advised to do by health professionals, but it’s impossible to prevent every blow from landing.” The helmet was made to measure using leather, padded foam and plastic.

Mrs Hughes said: “The day we received the helmet from Newlife Thomas had an extremely violent tantrum and the damage could have been significant.

“The helmet worked exactly as it should have, keeping his head and eye in a protective bubble. It was such a relief.

“Thomas hates having to wear any kind of headgear, so we only use it for his worst tantrums, which are about twice a week, but sometimes more frequently.

“They used to be so emotional and stressful but now he’s beginning to understand that for the helmet to come off he has to calm down. We also use positive behaviour strategies to help.

“The helmet has been a Godsend and has without a doubt saved Thomas’s sight.”

Mr Hughes, a graphic designer, said he and his wife first noticed a whiteness in their son’s left eye in February and an ultrasound scan at the John Radcliffe Hospital in Oxford revealed he had a detached retina. They were offered a thin helmet without a visor by the hospital, which is run by the Oxford University Hospitals NHS Foundation Trust, but the couple say this didn’t provide adequate protection so were told to use boxing gloves.

Mr Hughes said: “It’s preposterous to be attempting to stop somebody trying to hurt themselves while at the same time putting boxing gloves on, strapping them up and stopping them from removing them. They clearly hadn’t thought things through.”

Fortunately, Thomas’s quality of life hasn’t been affected by his partial loss of sight and he is still able to play, run and balance without any problems.

He said: “It’s really strong and sturdy, padded around the sides and it has got this full face Perspex visor at the front, so it’s stopping any further injury.

“One person can put it on, no problem. It gives my wife peace of mind when I’m at work knowing she’s got a way of dealing with it quickly.”

Thomas was diagnosed with autism when he was two and is schooled at home.

He has undergone various therapies to help with eye contact, social interaction and communication and comprehension.

Mr Hughes said: “These therapies are just as valuable for the parents as they are for the child because it makes you understand your child. For the child they are about communicating in different ways and relieving their frustration.

“Thomas is still non-verbal and has digestive problems. These two things are what cause his frustrations and tantrums. It’s that lack of communication when he’s got these problems and being unable to express it.

“You might get a tantrum once a month but it can be as frequent as a couple of times a week.

“This helmet has been great because it has resolved an immediate problem but it’s not the real answer. That’s working on ways to try to overcome these difficulties and deal with it in a better manner so he doesn’t keep having tantrums.

“We are a fairly private family and wouldn’t normally agree to do interviews. However, in this case we felt the need to not only publicly thank Newlife for their support, generosity and essential help that we received through this difficult time but also to raise awareness.

“If anyone is looking to raise money for a charity, but hasn’t decided which one, then I would encourage you to consider Newlife as a possible option.”

Thomas has a younger brother and sister and Mr Hughes said his condition had taught them to be tolerant and caring towards children who are different.

He said: “Life can been tough at times, especially when it throws up unexpected circumstances to deal with.

“However, despite this and all the ups and downs, I feel God has given us a beautiful family in every way and, as much as I would hope to see Thomas improve in certain aspects, as we do with all our children, I wouldn’t wish or want to change who he is because he is a wonderful creation and for that I am eternally thankful.”

To make a donation to Newlife, visit newlifecharity.co.uk