Record-breaking stand not enough as visitors hold on 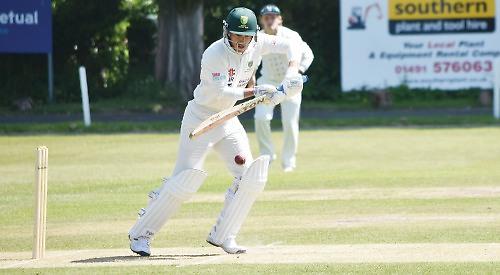 DESPITE a good performance across all departments, HENLEY were unable to take maximum points against a gritty HORSPATH side in the first of the season’s timed format fixtures last Saturday.

Although the away team never really challenged they showed plenty of fight and skill to get to 238-5 in pursuit of Henley’s 308-5 declared.

Henley will be disappointed not to have taken more points from the game, with their spin attack lacking a little penetration regardless of the good batting track at the Brakspear Ground. They will take heart from a strong batting display, which included a club record opening stand of 211 from skipper Michael Roberts and coach Matthew Rowe.

On a humid morning Horspath skipper Will Eason won the toss and elected to bowl. In spite of some good new ball bowling by Eason, Manley and Brown, it was Henley’s openers who dominated the morning session. Rowe in particular caught the eye with some good driving off the seam bowlers, whilst Roberts quietly went about his business at the other end, rotating the strike and picking off the bad ball when the opportunity presented itself.

The introduction of spin initially did little to quell the flow of runs, as Belcher and Cosford struggled to settle with both Rowe and Roberts continuing to find the boundary with relative ease.

Cosford, with a slightly more defensive field, began to slow the rate a little and ensured that at lunch Henley were under five an over with the score on 150-0 off 35 overs.

After lunch and blessed with quite a bit of the strike against the spinners, Roberts began to accelerate the scoring as Rowe took the role of strike rotator. It wasn’t too long before Roberts brought up his and the team’s first hundred of the season, hitting Cosford for six over long-on.

Rowe was then dismissed for a fine 86, adjudged lbw off the bowling of Cosford, to deny him his second league hundred for the club since joining in 2015. Rowe’s dismissal, with the score on 211, set a new club record for the first wicket, beating the previous record of 165 in 2014 against Oxford between Barnes (82 not out) and Roberts (76 not out).

Roberts fell shortly after, caught at deep cover for 109, which allowed both Woods and Morris to go to work against the now tiring Horspath attack. Both looked in great touch, with Morris typically brutal down the ground and Woods deft with his stroke play square of the wicket.

Morris fell to Belcher trying to hit another maximum, well caught at long-on by Robertson, bringing Rishton to the crease who continued to go hard at the returning seamers. Once Henley passed 300, the declaration was nigh and on 308, Roberts called Woods and Rishton back to the pavilion.

Although a dominant display, Henley would have to be outstanding with the ball to find 10 wickets on what was now in the afternoon sun, a great surface to bat on.

The lethal Nugent and Afridi started brilliantly, with the latter bowling Robertson in his first over after five almost unplayable deliveries. Nugent had Cosford bowled soon after, leaving the away team on 13-2 with plenty of work to do. However the experienced Rob Eason joined Fitzjohn and the pair began to rebuild, with Fitzjohn shaping up well against the Henley attack and looking in particularly good touch. With Henley’s spinners entering the fray, you sensed a wicket could fall any minute and it was Singh who produced a false shot off Eason to have the batsman caught by Woods at mid-on. Skelton was then run out by Rishton just before tea, at which stage Horspath were reeling somewhat on 71-4.

After tea Horspath made no real attempt to go for the win, which meant little risk was being taken by Fitzjohn and overseas player Daryll Brown.

Both Fitzjohn and Brown kept the door firmly shut and despite their best efforts, Henley were simply unable to get the breakthrough. Fitzjohn brought up his century before he was removed soon after by Brock, caught at mid-off by Roberts. The remaining overs played out without incident and Horspath finished 70 runs short with five wickets still in hand.