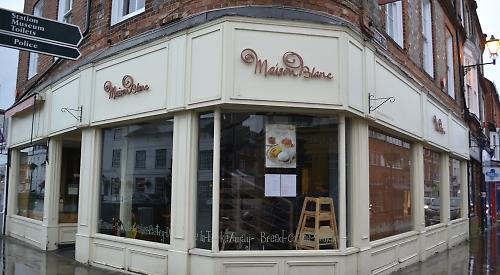 RESIDENTS are being urged to support Henley’s shopkeepers as the high street is on the verge of a mini-revival.

Seven empty shops will soon be occupied again while five more are about to be marketed with known interest already.

That leaves just one other town centre shop in need of a tenant as the remaining three vacant units are unavailable due to building work.

The old Henley Cycle Shop in Reading Road, which closed in January, has had its lease assigned and is being refurbished.

The former Duke Street premises of Barbara Easton, who left in April after 25 years in order to retire, is now under offer.

The former Blue Cross charity shop in the same street, which had been trading for 10 years but closed after a rent increase, has been let to an art gallery.

The former Maison Blanc coffee shop on the corner of Hart Street and Duke Street, which closed in March last year, has been let to the Harris + Hoole coffee chain and is now undergoing refurbishment. The former Sno and Sun Gear unit in Market Place, which closed last August after eight years due to retirement, has also been let.

The neighbouring Da Luca Italian restaurant, which closed in January last year after 18 months, has been let to another restaurant operator.

Boatique in Friday Street closed after six years last weekend but is already under offer. Meanwhile, in the last three months, La Strada in Bell Street was rebranded Coppa Club by its parent company, the Rug Shed opened in the former Central Home premises in Reading Road and the British Heart Foundation shop in Duke Street has been refurbished.

The Starbucks coffee shop in Market Place, which was forced to shut in April due to flooding, will re-open tomorrow (Saturday).

The changes mean Henley has a 3.1 per cent shop vacancy rate compared with 11 per cent nationally and town centre manager Helen Barnett says it is important to stay positive.

She said the slump on the high street nationally hadn’t affected Henley as much because the town has fewer national chains.

“We have a lot of independents who work very hard with their customers to encourage them to come back,” she said.

“We also have smaller units which has prevented us from being a ‘me too’ town. We have new businesses like Drifters and Spoon which are offering something different and we have Smiley café at M&Co and others which have been here for a long time.

“The state of retail is changing as people are looking for a more experiential shop. We are attracting visitors as all the coffee shops seem to be doing quite well.”

Ms Barnett, who has been in post since September 2016, said she was working with agents and landlords to get the best possible mix of shops.

She said: “We have lots of people interested in taking over our units as Henley has a lot going for it.

“Units always come and go but there is always lots of interest in Henley. There are also a lot of creative people who would be interested in taking some space, it’s just asking the landlords to be more flexible.

“That’s about Henley working together to make sure we get the best offering. We have to work under a town and community umbrella.”

Mayor Glen Lambert said there was a negative perception about the state of shops in the town which was partly down to the three empty units in Market Place.

Two cannot currently be let due to the Gardiner Place development at Market Place Mews, which is due to begin late next month, and third is the former Hearn of Henley shoe shop which has been closed for years. The premises currently uninhabitable and is being redeveloped.

Councillor Lambert said: “I think part of the problem is people unfairly talking the town down as we are doing so much better than high streets nationally.

“People see the closure of empty units that happen to be close together and, yes, it is an eyesore, but this gives them the impression that Henley is dying but it isn’t. People talk about the 15 coffee shops in Henley but they are not closing down — there is clearly a market there for people to socialise. The knock-on effect is that people will pop into the shops at the same time.

“All that’s happening is the natural rebalancing of the high street from primarily retail to a more social one but you can still get almost anything you need in Henley without clicking a button online.

“I do wish everyone would stop saying other towns are better and Henley is going downhill. Yes, we need to address some problems like parking but by talking about it all the time it creates a negative perception.

“These empty units should be snapped up as soon as they go on the market but if you go online and see the comments it could put people off. I don’t think we should be putting any barriers up in front of any business. We do need to look after our independents as we want Henley’s high street to remain unique and special so that it continues to offer what other high streets do not.”

Niki Schafer, who chairs the Henley Business Partnership, said the town needed a long-term vision backed by the business community.

She said: “It is easy to point fingers and say, ‘there’s an empty shop’. There is quite a lot of scaremongering among residents, particularly on social media, but they don’t understand the logistics of it all.

“I would love to see landlords take more responsibility and encourage new shops in town rather than relying on a safe bet like a charity shop. It would be nice to see more women’s boutiques because we want Henley to become more of a destination. We want people to come here because there is a good selection of shops.

“I am delighted that we are not doing as badly as other places but I want us to up our game and have a strategy and understand that it is going to be long-term.

“It would be good to have a real vision for Henley on how we are going to increase footfall but it has to come from the businesses as well, which includes the landlords.

“You aim to fill all the spaces but we want to fill them with the right retailers so the town has a good vibe and people want to come to shop. Henley is such a good brand name, it really should be rammed with beautiful quality items.

“The Henley Homes and Gardens Show I organise had quality stuff interspersed with everyday items that people need and this brings people in. We are probably the best town in the country at putting on events, festivals and shows to attract people but are they shopping while they are here?”

Henley MP John Howell said: “I am extremely glad to see that the shops in Henley are coming back into existence. These things have a cycle and it is important to break that cycle to ensure that shops are full all of the time.

“I do go shopping in Henley and I do encourage others to shop locally.

“We have already reformed the business rates quite a substantial amount and I am always willing to discuss how they can be reformed more than that.”