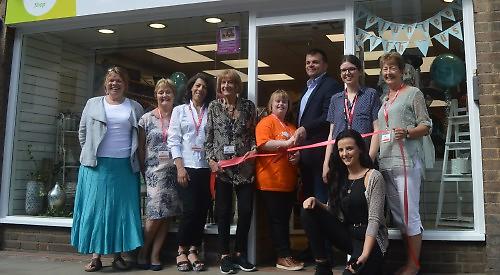 THE Helen & Douglas House hospice charity shop in Henley has re-opened after a makeover.

The Duke Street store is more welcoming, brighter and lighter after the refurbishment organised by new manager Emmaline O’Toole.

A team of 12 shop staff and volunteers worked for three days to complete the transformation.

This included repainting the interior, installing new lighting, re-organising the displays of bric-a-brac and clothes and putting up new signs inside and out.

On the walls are pictures of children who have been cared for by the hospice with quotes from their parents about the support they received.

The work was funded by Daniel O’Toole, of Above The Line set assistance and security, based at Pinewood Studios, who is a long-term supporter of the charity.

Emmaline, who has volunteered and then worked for the charity for eight years, said: “The shop looks so much more welcoming. We have used light, bright colours to reflect the hospice, which is a colourful, vibrant place where children come and have fun and create memories which will be treasured by their families. Hopefully, the makeover will attract more customers.

“I would like to say a massive thank-you to all my amazing volunteers and to Above The Line.”

The shop has been open 10 years and is one of 33 in Oxfordshire which help raise the £5million a year that the Oxford hospice needs to care for terminally ill children and young adults.