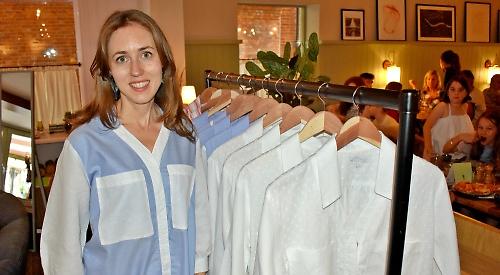 A WOMAN who lost both her parents when she was in her twenties has founded a luxury nightwear business that will give a share of its profits to charity.

Siân Adkins, 30, of Reading Road, Henley, used to be a retail buyer for the clothing section of several department stores but wanted to pursue something more fulfilling.

Now she has launched Siân Esther — her first and middle names — and says the venture will “support women to fulfil their dreams”.

She will share one-fifth of her profits with three charities, the Luminary Bakery, which employs women who have been victims of crime, poverty, homelessness or domestic violence, Mercy UK, a Christian charity for women struggling with mental health problems, and the Marylebone Project, a women’s homeless shelter.

Mrs Adkins, who lives with her husband Dave, said the business had given her a sense of purpose and helped her cope with the loss of her mother Jenny, who died of a brain haemorrhage 18 months ago, and father Peter, who suffered a fatal heart attack in 2012.

She currently offers five pieces, all made from cotton and natural fibres, including a nightshirt that retails for £85.

She also sells a make-up bag made by women who had been forced into prostitution and espadrilles made from leather offcuts which are made by women at home who have struggled with conventional employment. Mrs Adkins, who recently moved to Henley from her native Wokingham, had a display stall at Royal Ascot last week and will also be exhibiting at the Goodwood Revival Meeting in West Sussex in September.

She said: “I wanted to focus on fewer items but of higher quality and with an effortless, elegant look.

“They’re not just good for bed but for lounging around the house or even as beachwear.

“While I was doing my market research, I noticed that most of the offering was either overtly sexualised or very frumpy whereas this is a happy medium with a modern twist.

“Losing my parents affected my sleep but I realised how fortunate I was to have a fantastic support network around me. Not every woman has that so I wanted to help those who don’t have many people to turn to.

“I’ve always had a creative side so as well as being a more fulfilling career it has been something to help me through the grief.

“It has been quite busy starting the business and moving house at the same time but I’ve been through so much that nothing seems to faze me.”

She launched the range at Coppa Club in Bell Street, Henley.

Mrs Adkins said: “It went really well and it was lovely to have so many friends and members of my family around me to share it with.

“We were drawn to Henley by the beauty of the river, the culture and the atmosphere and so far we’re really pleased to be living here.”