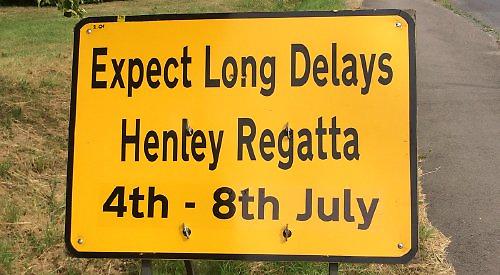 SHOPPERS are being discouraged from coming into Henley during the royal regatta, claim traders.

Large yellow signs have been put up at the entrances to the town which warn drivers to “expect long delays” during the five-day event, which begins on Wednesday.

She said: “We have asked for so many years to have the signs reworded a bit more sensitively. The truth is there can be delays but it is only at peak times and it is not always like that.

“During the regatta is the best time for people to come into Henley to shop as the people who are at the regatta park in the long-stay car parks so you can always find a sparking pace in the town centre. Having these signs at every entrance route puts people off from even attempting to come in because they think it is going to be a nightmare when it isn’t. It is quite damaging to Henley.”

Laurence Morris, who owns a menswear shop in Duke Street, said: “There needs to be signs that say ‘please be patient’ and ‘welcome to Henley’ so they are telling people that Henley is open for business.

“As it stands, they are sending out the wrong message for the town and could put people off who might otherwise be coming to Henley and not just for the regatta.” Jayne Walker, who is manager of Cook on the corner of Duke Street and Friday Street, said she has seen a gradual decline in shoppers during regatta week over the 12 years since she has worked in the town.

She said: “People have felt more and more that they don’t want to come into town during the regatta and the signs certainly don’t help. But if you come in at the middle of the day the traffic is fine.

“You could change the wording so it gives the idea of timings for when it is busy, like from 9am to 11am. When people leave the regatta varies.”

George Jackson, who works at Anthony Paul jewellers in Bell Street, said: “I think footfall has slowed down a bit. We get a little bit of business from the regatta but it is good to support it as the regatta puts Henley on the map.”

He welcomed the suggestion last week by the Deputy Mayor that the King’s Road car park should have another tier, saying: “I think that would be brilliant.”

Barry Wagner, owner of Gabriel Machin butchers in Market Place, Henley, said he advised his regular customers to visit his shop later in the day. He said: “I have worked in Henley for about 14 years and everyone is down at regatta by 11am and the town is dead until 4pm.

“Parking is an absolute doddle — you can drive around the car park and there are lots of spaces and there is really nobody in town. It would be nice if we can have these signs reworded.”

Jenny Lloyd, a volunteer at the Regatta Café, said: “I am new to Henley but can imagine that the signs put people off.

“What the council needs to do is manage the traffic better and then you wouldn’t have the delays.”

A spokesman for the county council said: Signs are put up each year which are aimed at preventing through traffic rather than people that will be attending the regatta.

“The intention is to discourage congestion during what is the busiest period of the year in Henley and people attending the regatta won’t be deterred. The comments regarding the precise wording have been passed on to our highways team for consideration.”