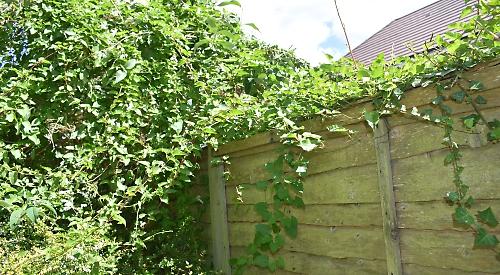 A WOMAN says her garden is under constant attack from weeds because a developer has created a narrow strip of wasteland outside her boundary wall.

Louise Allen, of King James Way, Henley, has criticised Oakford Homes for erecting a wooden fence about a foot away from her own to mark out the curtilage of the new Greys Mews development off Greys Road.

Since construction work began last year the strip has become overgrown with various species of creeper which now climb over her fence while several larger species have taken root, including a number of sycamore saplings.

The creepers grow rapidly so unless Mrs Allen cuts them back regularly they would block the passageway between the front and rear of her home.

The other side of the company’s fence adjoins a private footpath which runs along the back of the 17 new homes which are being built on the former site of Makower textiles.

properties to quickly access the estate’s central forecourt from their gardens.

The developer also chose not to remove a rusty wire mesh fence sandwiched between its new fence and Mrs Allen’s, which marked out the boundary of the old Makower premises.

This fence, which backs directly on to Mrs Allen’s front garden and an alley to the rear of the property, is supported by concrete posts and topped with barbed wire.

Mrs Allen says it is now redundant and an eyesore and should have been removed.

She complained to Oakford and landowner Ashill Developments and says she was told that the problem would be resolved before construction finished. She says Ashill initially offered to remove both her garden fence and the wire mesh and then tidy up the land and give it to her, effectively extending her garden.

However, after she asked for this pledge in writing, the company simply offered to give her the land, leaving her to remove both fences and clear the overgrowth herself.

Mrs Allen, a 47-year-old IT worker, who has lived at her property with her daughter for more than 10 years, says the strip of land wasn’t shown on the drawings submitted to South Oxfordshire District Council when Ashill sought planning permission in 2016, so she has asked the council to investigate.

“It’s like a ‘no man’s land’ where my garden ends and their footpath begins and it isn’t shown on the plans they put in.

“I didn’t say anything at first because I wasn’t sure what timeframe they were working to but as time went by I got more and more concerned that they were just going to leave it like that.

“There’s no problem with the development itself, which I actually think is pretty nice even if it’s nearer to my boundary, but on this particular aspect it looks like they’ve cut corners.

“By putting up that second fence they’ve only made it look nicer from their side and the problem isn’t immediately noticeable to people coming to view those properties.

“Ashill promised to sort it out but several people said they were just paying lip service and didn’t plan to contact me again, which seems to have been the case.

“They’ve offered me the land itself but I don’t want the hassle of actually getting it into good
condition.

“I can see this becoming a problem once those houses are sold because the new owners will want to do something about it as well.

“It’s not clear who actually owns that strip of land so there could be some arguments about who is responsible.”

Przemek Sztuba, who lives in the flat upstairs, said: “I had been away on holiday and noticed it when I got back home and looked out of my window.

“It looked really messy and I just couldn’t believe that anybody would do something so stupid.”

South Oxfordshire District Council says it is a civil matter and not a breach of planning policy.