Every rower wants to win here, says the man who matched feat 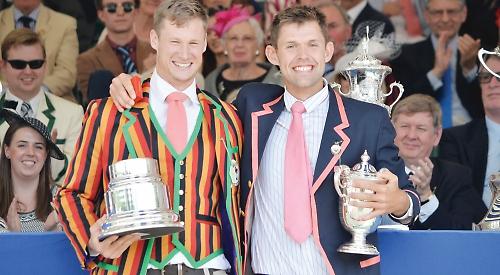 He won the Queen Mother Challenge Cup, having won the Prince of Wales Challenge Cup and the Fawley Challenge Cup in previous years. In total, he has recorded six victories at Henley.

Beaumont, 24, who lives in Hart Street, Henley, experienced his first victory in 2012 when he won the Fawley Cup with Sir William Borlase’s Grammar School, beating a Marlow Rowing Club crew that included Glenister in the final.

The following year Marlow took their revenge in the same event but by then Beaumont had joined Leander Club and achieved the first of three successive victories in the Prince of Wales Cup.

In 2016 he also won the Double Sculls Challenge Cup with Nick Middleton. The same year he was a last-minute replacement for the ill Graeme Thomas in the quadruple scull that came fifth at the Rio Olympics. He is now targeting the Tokyo Games in 2020.

He said: “Harry and I knew that one of us could win all three quad events and it would be the first time anyone had done it. But I wasn’t thinking too much about the record. The important thing was to get our bow ahead at the finish line.

“I was so pleased for Harry and his crew because they got a record time as well — he beat my record time that we set in 2013 for the Prince of Wales. Harry and I have had some fun banter with our Henley experiences and I have reminded him of the 2012 Fawley final but we both want to see each other win.”

Beaumont, who started rowing at the age of 10 with Maidenhead Rowing Club, was introduced to the sport by his father Peter, who came fourth in the GB eight at the 1988 Olympics in Seoul.

He recalls attending the royal regatta with his father in 2004 and meeting the men’s four, including Matthew Pinsent and James Cracknell, that had just won the Stewards’ Challenge Cup.

Beaumont said: “I never thought I’d be an Olympic rower but I found the sport exciting and fun and I fell in love with it.”

This year he will be competing at Henley in the double scull again, this time with fellow Leander Club athlete Angus Groom. The duo are fresh from the success at the world cup regatta in Linz, Austria, where they took gold to follow the silver they won at the world cup in Belgrade.

Beaumont said: “Winning at Henley is something every rower wants to do and I feel so privileged to have won so many times and it’s something I never want to stop doing. It’s a huge event and there’s nothing in the world quite like it.

“For one, it’s a competition where all our friends and family can come and watch. The crowd is so loud and if you’re rowing for Leander or a British team against foreign opposition everyone wants you to win.

“This year we’re probably going in as one of the favourites but we still have to go and perform. I’m just thinking ‘I want to win’.”