Boats (and more) are coming... 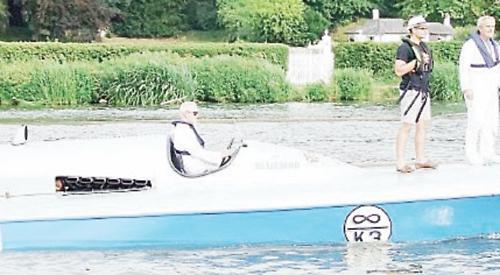 A BOAT which broke the world speed record will appear at the 40th Thames Traditional Boat Festival in Henley.

Sir Malcolm Campbell’s Bluebird K3 speedboat, which travelled at 130mph, will be one of the star attractions at the event at Fawley Meadows from Friday to Sunday, July 20 to 22

She was due to appear at the festival two years ago but suffered mechanical problems.

She has since been overhauled and so should run the regatta course perfectly this year.

Festival organiser Lady McAlpine said: “No one who heard her making her way up to the start of the course when she was here two years ago will forget the noise of her engines on ‘tick-over’ but sadly that was all we heard as an engine fire prevented her making her run.

“However, the problem has been solved. She has been thoroughly overhauled yet again and is currently due to make a run in Switzerland to celebrate the 80th anniversary of her last record-breaking run. Everyone involved is praying that there will be no mishaps to prevent her making her runs here.”

The festival, which is also known as “the Trad”, is the largest gathering of traditional river craft in the world. There will be vessels ranging from coracles to Edwardian steam launches and Sixties film stars’ toys and a flotilla of Dunkirk Little Ships.

The Queen’s rowbarge Gloriana will also be making a return and visitors can see CMB9, a First World War radio-
controlled torpedo boat. A hurricane and three triplanes will perform overhead at about 3pm on each afternoon and there will be a display by ERT Search & Rescue and the Royal Marines.

Lady McAlpine said: “This involves a hovering helicopter and men being lowered to assist people in trouble on the water.

“On land there will be old military vehicles, re-enactment groups, boat-builders, boatyards selling old craft and boats of every kind that fit within the stringent rules of no fibreglass or plywood and trophies will be awarded in different categories.

“There is a trophy, too, for the amphibious vehicles which are fast becoming the stars of the show as they do tend to look preposterous.

“Last year even ‘White Van Man’ took to the water and boat passing what appeared to be a Triumph Herald in the water almost collided with another as its owner stared in disbelief!

“Vintage and veteran cars have long been an attraction at the event and more come each year, with old motor bikes and the Solent Vintage Bicycle Club.

“Their illuminated parade at 10pm on Saturday is a delight and coincides with the illuminated boat parade which was spectacular last year so the committee are hoping that the competitive spirit will prevail again this year.”

Other attractions include riverside “shops” selling everything from varnish to velvet cushions for boats, clothes and accessories, jewellery, paintings, plants and luggage to helicopters and garden buildings.

The “Boat Jumble” also returns, offering old, decorative and quirky items for the home and garden.

There will be live music from bands including The Covered and Annie and the Doughboys,

The organising committee has agreed there will be a small charge for entry to the festival after 4pm but not after 6pm.

There will be a crackdown on people who enter the festival site without paying and more volunteers are being asked to come forward to help on the gate and check wristbands.

There won’t be a fairground this year but there will be some children’s rides, including swingboats, and a Punch and Judy show. Trips on Gloriana will be allocated by means of raffle tickets as each one has only 22 places available.

Lady McAlpine said: “The committee has tried to attract local sponsors to keep the event as much ‘Henley’ as possible.

The chief executive of the Rug Company, who lives in Fawley, has brought us Gloriana and Michael Shanly’s charitable trust has been a loyal supporter and sponsor of the Trad for many years.

“Grundon have cleared the rubbish for the past two years without charge and will do so again this year. Hobbs of Henley are again providing the free ferry service for ticket-holders but, if you want a longer trip, take one on the beautiful old steamer, Alaska.

“Henley Town Council’s decision to support the event, as reported in last week’s Standard, has persuaded others to join in. Phyllis Court Club is sponsoring the members’ enclosure. The committee is also thrilled that Bremont are sponsoring rhe Trad again this year.”

Three-day, weekend and daily tickets for juniors (aged 13 to 17) and adults are available to buy while those aged under-12 can enter for free every day. Prices range from £4 single entry to £26 for three days.