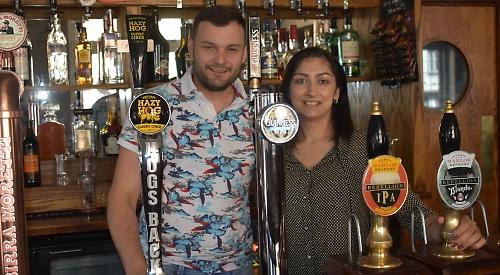 A PUB has re-opened after being closed for more than four months.

Emma Ghinea has taken over at the Queen Victoria in Market Place, Henley, with her partner Andre Juganaru, who is the chef.

The pub, which is owned by EI Publican Partnerships, formerly Enterprise Inns, shut in February when Jamie and Marnie Liston, from Bracknell, left after just six months in charge.

Miss Ghinea, 28, who grew up in Redhill, said: “My family have always had pubs. I decided I wanted to have my own after helping them to run their pubs. I felt I was ready and prepared. As soon as I saw this pub I wanted it to be mine.” The couple will run the pub for three months before they have to decide whether to take it on permanently.

Miss Ghinea said she was excited about the venture. “If any of our neighbours need anything we will be happy to help,” she said. “If people want to use the pub for competitions they will be welcome. I want people to come back.”

The games, like pool and darts, will remain and the pub will open early on Fridays to serve breakfast and on Saturday. The couple also plan to replace the garden furniture and plants.

The Listons took over from Nick and Lesley Cobb who left in July last year after more than four years.