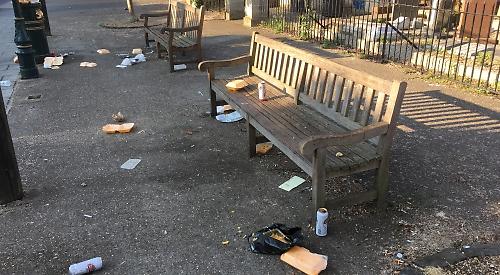 TOWN councillors, officers and shopkeepers cleared up after revellers during Henley Royal Regatta.

There was litter, including beer cans, pizza and kebab boxes, left strewn around streets in the town centre and reports of vomit in doorways and pavements stained by spilt drinks.

The problem was worse on Saturday morning with rubbish in Reading Road, Duke Street and Market Place, where the bins were overflowing.

Town manager Helen Barnett and council information officer Louise Hastings donned rubber gloves and scrubbed pavements with hot soapy water and asked businesses to do the same to their frontages.

Ms Barnett said: “There were quite a few complaints on the Friday so I went round the town with Louise as we were trying to clear up.

“When we actually went out it wasn’t as bad as we had been led to believe but we wanted to make sure it was as good as it could be. I think we got on top of it.

“I was going into every other retailer to ask them if they could help us. They had hot soapy water and washed their pavements in the morning like people do abroad.

“They know it’s an unpleasant experience but it does make it much nicer for everybody. Lots of people were behind it and on Monday the whole place looked much tidier.”

Ms Barnett added: “It was a team effort and everyone was going over and above to try to keep the town tidy.

“Biffa were out there but due to the number of people the bins got filled up and we don’t have bin collections in the middle of the night.

“I don’t blame Henley Royal Regatta because the rowing finishes at 7.30pm and the young people of the town are encouraged to go to Mahiki or Chinawhite and that area further down the river.

“When these close they come back into town to get taxis and transport and are all hungry.”

Councillors Hinton and Eggleton received phone calls complaining about the state of the town and collected 11 bags in just over an hour with help from Cllr Hinton’s daughter Hallie, seven.

She said: “When I confronted them they said they’d been working in the early hours of the morning but Hallie picked up at least 15 bits of rubbish so they can't have been that thorough.

“They were working much earlier on the Sunday morning but their job was made much easier as Dave had gone out again on Saturday evening and picked up 24 bags of rubbish.

“That makes a total of 35 bags, which raises the question of what exactly they were doing all weekend.”

A South Oxfordshire District Council spokeswoman said Biffa's teams had been deployed from 6am until 6pm on each day of the regatta.

She said: “The hot weather and football on Saturday impacted on litter levels but our waste contractors put on extra crews in Henley town centre throughout the event.

"Eighteen large bins were also positioned in the town centre to help people dispose of their litter. Street-cleaning arrangements were arranged well in advance and were agreed by Henley Town Council and partner organisations.

"It is unfortunate that some people litter and we would always encourage people to put their rubbish into bins.”