Villagers come together in memory of murdered MP for second year 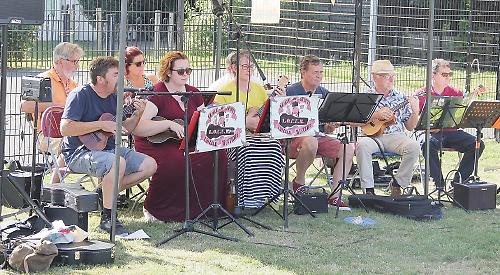 MORE than 150 people attended a second annual community event in Benson in memory of the murdered MP Jo Cox.

The event was organised by a team led by resident Adrian Lovett, who had known Mrs Cox for about 15 years and organised the inaugural event last summer.

The performers included his daughter Ellis, 17, who sang while her friend Max Godwin-Suttie sang and played the guitar and “Marvellous” Malee Makoka, nine, performed a stand-up comedy routine.

Ukulele group Locum — the League of Crafty Ukulele Masters — played a collection of songs including Funkytown, which it dedicated to Benson, and there was also music from the Wallingford School Bigg Band.

Mr Lovett, 48, who lives with his wife Steph in Brook Street, became friends with Mrs Cox when they worked together at Oxfam in the early 2000s.

Mrs Cox was head of policy at the charity and chaired the all-party parliamentary group Friends of Syria.

“You never quite knew whether it will work second time around,” he said. “The first time there were all the immediate memories of Jo and what she stood for. But not only did it go really well but I also felt in some ways it was all about Benson and there wasn’t really much mention of Jo.

“It was just very relaxing and people were chatting to people they hadn’t spoken to before or hadn’t seen for a while and the young and old from the village were brought together.

“I think Jo would have been really pleased to see that because she was all about building connections in the community. Throughout the afternoon I was thinking, ‘she would have really enjoyed this’.

“Perhaps we’ve established a small, new tradition in the village that hopefully will keep going in years to come.”

Mrs Cox, a Labour MP and mother-of-two, was shot and stabbed to death in Birstall, West Yorkshire, where she had been due to hold a constituency surgery, in June 2016. Thomas Mair was later found guilty of her murder and jailed for life.