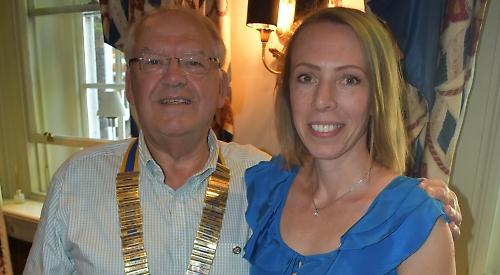 A SEMI-RETIRED management consultant has become the new president of Henley Rotary Club.

He has been a member for five years and said it would be an honour to lead the club for the next year.

Mr Thompson, who has lived in Kingwood for 18 years, said he had always wanted to help the community and was a member of West Forest Round Table in Wokingham when he lived in the area.

He said: “The Round Table in Henley has folded so Rotary was an obvious place to go to raise money for charity and serve the community.”

As president, he wants to encourage younger people to join the club, which meets weekly at lunchtime and in the early evening.

Mr Thompson said: “I think the majority of the members are retired and it’s more difficult for people who work to get to weekly meetings, which is a very high commitment.

Whether they are self-employed or working remotely for their employer, it’s an opportunity to get involved in something local.

“I’m quite happy to have new members who can only make it once a month and using the internet more to keep people informed.”

Mrs Bunina, from Rotherfield Peppard, said she had enjoyed her year in office during which the club raised about £20,000.

“It’s the fellowship and friendship,” she said. “In our club it’s very easy to get on with people — there’s no politics or issues, it’s just a happy environment and everybody contributes.”