Boy is headteacher for day thanks to mum 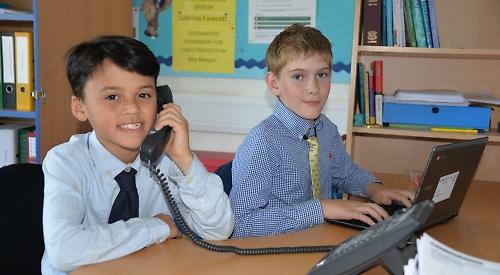 A BOY was given the chance to run his school for the day.

Alastar Hall became headteacher of Trinity Primary School in Henley after his mother Charlotte won the prize in an auction at the Friends of Trinity School ball earlier this year.

He was helped by Dominic Pusey-Arsyad, also 10, who became assistant headteacher.

The boys supervised the start of the school day, had a meeting with the school council where they discussed the outdoor recreation areas and carried out a “learning walk” where they checked displays of work done by fellow pupils.

They also oversaw a fire drill, checking all the classrooms to ensure they had been evacuated properly, and took a maths lesson with eight children. The boys were also given a £2,000 budget to pick out furniture for an outdoor classroom on the school field.

Alastar said: “I was nervous standing up in front of everybody but I did enjoy it.”

Dominic added: “I’ve found it quite cool and I did really like taking the class.

“It was fun but at the same time if you did it every day it would be kind of like going to school!”

Headteacher Helen Jones said the point of the job swap was to give the boys a sense of responsibility and more knowledge of what goes on behind the scenes.

“The boys were fantastic,” she said. “It was wonderful to see them taking the maths lesson and they didn’t need me to be there in any way. I should have had a day off!”