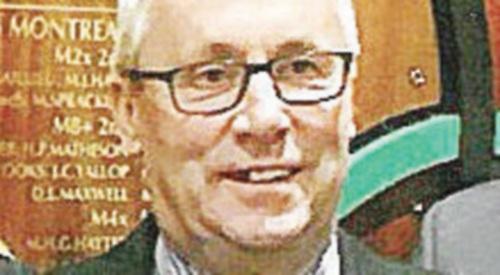 A MAN who has driven umpire launches at Henley Royal Regatta for almost 50 years retired on finals day.

Colin Hinton, 67, was on duty as the Windsor Boys’ School took on Maidenhead Rowing Club in the final of the Fawley Challenge Cup in the last race on Sunday.

He was at the wheel of Amaryllis, a launch which was also driven by his late father Bill in the Fifties.

After the race he was presented with a silver goblet by regatta chairman Sir Steve Redgrave to mark his many years of service.

Mr Hinton, of Talbot Close, Caversham, started driving launches in 1968 and went on to become the number one regatta driver.

He began his career on a Hobbs of Henley boat called Magician. In the early Seventies he switched to Amaryllis, which was then the number one launch and also owned by Hobbs. Except for two regattas in the Eighties that he missed, Mr Hinton remained with Amaryllis until 1993 when he moved to the Argonaut, a new Henley Royal Regatta launch that immediately became the number one launch.

He switched to Herakles in 2008 when it became the top launch and remained with it. Part of his role was to oversee racing on finals day.

Mr Hinton said: “I was honoured to be driving Amaryllis on the last race. My dad drove it for several years and to actually finish the regatta driving that launch, I was on a high.

“My family are very proud of what I’ve done. I wasn’t too emotional — I came past the progress board, gave a punch in the air and and thought, ‘that’s it, all done and dusted’.

“It was great thinking of the last 48 years that have gone by. Sir Steve said all the stewards and himself appreciated what I’ve done over the years. All the stewards and umpires were there and my team of launch drivers — it was a nice occasion.”

Mr Hinton said he would remember ferrying members of the royal family, including the Duke of Edinburgh, Princess Anne and Prince Andrew.

He also transported Olympic champions Sir Chris Hoy and Dame Kelly Holmes when they presented the prizes at the regatta.

Mr Hinton said: “The regatta has changed over the years — it has got bigger and bigger. The stewards and umpires have been very good to the team — they look after us.

“I enjoy the rowing side, although I’ve never rowed myself. I just love the people, the atmosphere and I’m very proud to be out there.

“The regatta is a matter of being out there, doing the job very quietly. If you’re out there and they don’t know you’re there, you’re doing the right thing.

“I can now enjoy the regatta from the bank with my wife Sylvia and family. Hopefully, I’ve taught the team well!”

He joined the company in 1965 when he was 15 and undertook a five-year apprenticeship in marine engineering. The firm was then run by Dick Hobbs, whose son Tony later took over before he was succeeded by his son Jonathan, the current managing director.

Mr Hinton was made a Royal Waterman to the Queen in 1996 and held the role for 19 years. He was part of a guard of honour on the Spirit of Chartwell, a barge which carried the royal family for the Queen’s diamond jubilee celebrations in London in 2012. He is now an Extra Waterman.