Man strips to boxers to retrieve phone from riverbed 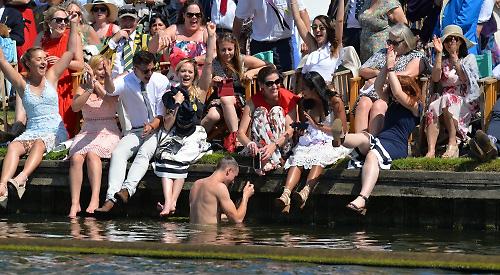 THERE was plenty of action on the river at this year’s regatta… and it wasn’t just the rowing.

One unfortunate woman dropped her mobile phone into the Thames while sitting on the bank with friends.

Thankfully, her friend came to the rescue, stripping down to his boxer shorts and taking the plunge.

His companions on dry land pointed out where they thought the phone may be as he repeatedly submerged himself in an effort to locate it.

His actions had soon attracted the attention of a group of photographers on the press pontoon opposite.

After three or four attempts, he finally resurfaced with the phone and was greeted by a loud cheer from his friends and others on the bank.

Let’s hope the phone was waterproof!