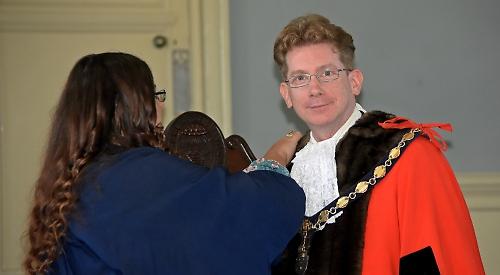 THE Mayor of Henley has been accused of overriding democracy.

The accusation against Glen Lambert was made by Julian Brookes, leader of the opposition Conservative group on the town council, after he restricted debate at a full council meeting last week.

The Conservatives wanted a debate on who should sit on the council’s committees and working parties.

The roles were decided at the council’s annual meeting in May but since then the Tories have won a by-election, meaning they have just one less councillor than the Mayor’s ruling Henley Residents Group.

Councillor Lambert, who was chairing his first council meeting, said he was “disappointed” the issue was being raised, adding: “The structure and membership of these committees has been debated and redebated for three months.

“The balance of the council has remained the same as last year.”

He said he would move straight to a vote on the matter without a debate.

Cllr Brookes responded: “This is overruling rightful democracy. We have not been given any opportunity to present our alternative case.”

Cllr Lambert asked him to sit down and stop speaking but Cllr Brookes refused, saying: “It has changed with the by-election [result] — we need to be given an opportunity to present our case.”

The Mayor then threatened to exclude the public from the rest of the meeting.

Councillor Will Hamilton (Con) claimed the town clerk, who was not at the meeting, would have allowed a debate.

Cllr Lambert warned the Conservatives not to bring the issue back to the next meeting.

“The subject was used to disrupt mayor-making in a shameful display,” he said. “I don’t want it on the next agenda.”

Cllr Brookes accused him of being “disingenuous”.

The Conservatives lost the vote on whether to debate the issue again and then the Mayor refused a request by Conservative councillor Will Hamilton to make another point, saying: “I will have no more emails on this subject.”

Earlier in the meeting, the Mayor urged members not to use the terms “HRG” and “Conservative”.

He said: “My intention is to conduct the meetings in a calm and businesslike atmosphere. Politicking will not be tolerated.

“There seems to be an election every few months, meaning there have been plenty of opportunities for people who want to play politics to do so outside this chamber.

“I urge all councillors to avoid using ‘HRG’ or ‘Conservative’ otherwise it is likely I will stop them speaking further. I ask all councillors to support this approach. I am sure it will benefit the reputation of this council, the town and its residents.”

The Mayor also welcomed a decision by the clerk that councillors should not ask questions during reports by the Oxfordshire County Council and South Oxfordshire District Council members.