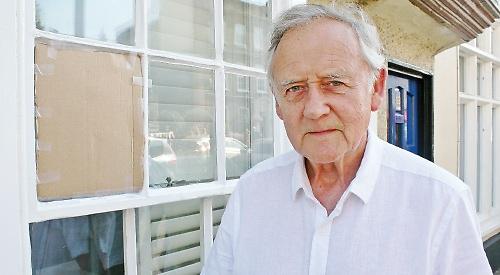 A COUPLE’S living room window was smashed during the regatta for the second year running.

Deon Melck, who lives at Speaker’s House in Hart Street, was watching television with his wife Gill at about 10.45pm on Thursday last week when they heard breaking glass and the sound of laughter and footsteps.

He turned around and saw the outer pane of a double-glazed window overlooking the street had been shattered, scattering shards of glass into the gap between the panes.

It was the same pane that was broken on the Saturday of last year’s regatta, when the perpetrator cut himself and police located him by following a trail of blood. Mr Melck wanted to prosecute but wasn’t given the chance after the offender agreed to pay a fine and compensation.

The button that operates the couple’s doorbell was also stolen on Friday. They have reported both incidents to the police.

Mr Melck said: “We were both startled by this sudden ‘bang’ and by the time I’d gone outside to investigate whoever had done it had run away. There was some blood on the window so the police will test it and perhaps identify them.

“It feels so wrong and we’re worried about what’s going to happen next year.

“The regatta is such a lovely event for the town and things like this really spoil it. You shouldn’t have to feel like you’re on your guard in your own home.”