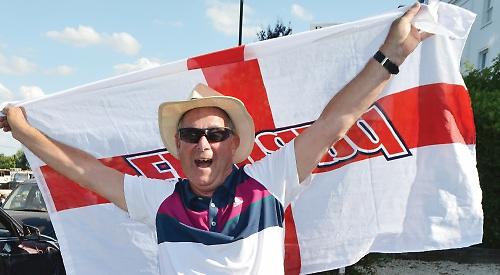 Tens of thousands of people descended on the town for the 179th annual rowing extravaganza, which ended with finals day on Sunday when 14 race records were broken.

As usual, the banks were a sea of colour thanks to women in their summer dresses and men in rowing blazers, while on the water spectators were in all types of boats, from traditional wooden craft to motor cruisers, hired rowing boats and fun vessels.

Spectators basked in the heatwave as temperatures topped 32C and regatta chairman Sir Steve Redgrave gave permission for men in the Stewards’ Enclosure to remove their jackets on four of the five days of racing.

On Saturday and Sunday the heat was so intense that jackets could be removed as early as 10.30am for only the fifth time in more than 40 years.

Some spectators further along the course jumped into the Thames to cool off and many chose to dip their feet in the water while watching the racing. Others took refuge under parasols and umbrellas or sought out shady areas. Tarmac around the regatta site melted in the heat and bottles of water were given to people arriving at Henley station.

On Saturday, the busiest day of the event, football fans took time out from the racing to pack into the town’s pubs and regatta bars to watch England beat Sweden
2-0 in the quarter-final of the World Cup.

When England scored, drivers on Henley Bridge tooted their horns and boats on the river followed suit, prompting waves of cheering and chanting from the spectators on both banks.

In the evening the celebrations remained good-natured with fans posing for pictures with some of the dozens of police on duty.

Henley Bridge was closed from 9pm to 11pm for the annual fireworks display, which this year featured a series of pink fireworks as well as a “200” at the finale to mark the bicentenary of Leander Club.

Earlier the club had a row-past featuring two eights containing Olympians with a total of 31 medals between them.

On Friday a Chinook and a Puma helicopter from RAF Benson flew low over the regatta site and on Sunday there was a fly-past by a Spitfire from the Battle of Britain Memorial Flight.

Up to 150 police officers were deployed in and around the town during the regatta. Armed police patrolled the regatta site and a high-speed police boat travelled up and down the river. Other officers patrolled the town centre and the towpath and police on horseback were drafted in on Saturday night.

On the water there was a collision involving the Hobbs of Henley motor launch Lily-Anna and a sculler outside the riverside properties in Wharfe Lane but neither boat was damaged.

A total of 565 crews — including 111 from overseas — had entered the regatta, the third largest entry on record.

Three new solid silver trophies were presented this year. The Town Challenge Cup, the Hambleden Pairs Challenge Cup and the Stonor Challenge Trophy were awarded to the winners of the women’s events that were introduced last year.

Sir Steve Redgrave praised the quality of the racing at the prize-giving ceremony, where the cups were presented by Dame Katherine Grainger, Great Britain’s most decorated female Olympian and a regatta steward.

Sir Steve said: “What fantastic racing and finals we have had — it has been incredible. We have had nine records that have gone at the barrier, 13 at Fawley and 14 at the finish — a total of 36 records.”

He also praised the organising team, saying: “There are so many people that bring this regatta together. We have a small but very professional team that work brilliantly all year round.

“The running of the regatta itself, especially the rowing, is largely down to a huge number of volunteers and the regatta would like to thank every one of them for their support, dedication and commitment. This regatta would not run without them.

“I’d also like to thank all the members and guests — they give us the opportunity to put this spectacle on.” He also thanked the regatta’s partners — men’s outfitters Hackett, Aston Martin, Henley watch manufacturer Bremont and, new this year, Moët & Chandon — for promoting the event to a wider audience.

He went on to thank Ottewill Silversmiths in Kent, which made the trophies for the three new events.

Sir Steve said: “Last year during the prizegiving of our three new events I made the mistake of saying we didn’t have any trophies. I was booed — I don’t think I’ve been booed often in my career!”

Dame Katherine, who won at London 2012 with Anna Watkins in the double scull, said it was an “absolute privilege” to present the trophies.

“It’s a wonderful thing to be part of. I never thought I’d get to be prize-giver. It’s a mixed blessing because it’s clearly such a privilege to be here when we have got more amazing silverware for women, more than we have ever had. I will give it away today with the hint of ‘I wish it was me’.

“The 2018 regatta will go down as one of the most successful, celebrated and hottest regattas and you’re all part of that.”