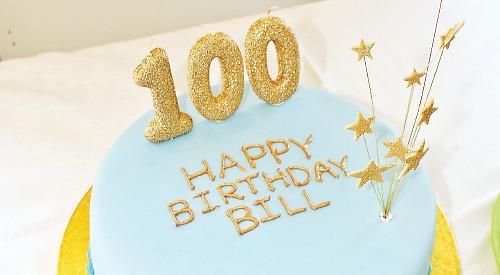 A MAN who has relocated to Henley twice has celebrated his 100th birthday.

Bill Hicks reached the landmark anniversary on Friday and marked the occasion with a party at Henley Golf Club the following day.

The celebration was attended by about 35 guests including his children Wendy Lewis and David Hicks, grandchildren Sian, Huw, Oliver and Suzi and seven great grandchildren, who enjoyed a buffet lunch with drinks and a birthday cake.

The celebrations continued at Mr Hicks’s home in Makins Road, where he still lives with the assistance of a daily carer.

Mr Hicks joined the golf club in Harpsden shortly after he moved to the town with his wife Peggy in 1960 and has been a member for most of the time since then.

The couple briefly moved back to Mr Hicks’s native Whitchurch in Herefordshire when he retired in the late Eighties but decided they had made a mistake and returned about eight years later.

The centenarian, who was the youngest of eight children, joined the army when the Second World War broke out and met his wife, then 17, while on exercises in her village in Wales in 1941.

The couple chatted then attended a local dance and the relationship blossomed from there.

They were married before he went off to fight  first in France and then Italy, where he guarded German prisoners of war. His wife worked in a munitions factory.

After the war the couple moved to Middlesex and Mr Hicks worked as an engineer for the area gas board and then as a sales representative for the steel company Arthur Lee.

The couple moved to Elizabeth Road in Henley because they felt their children should grow up further away from London.

Mr Hicks remained active well into old age and was a keen lifelong gardener and DIY enthusiast. Speaking at the party, Mrs Lewis, from Wiltshire, said: “It has been a lovely day. There’s a great atmosphere and Dad’s really enjoying it — he’s very relaxed and pleased to see everyone.

“He has always enjoyed living in this area, which is proven by the fact that he came back.

“He’s in remarkably good health for 100 years old and is always happy when it’s warm because he can sit outside cooking himself in the sun!”

Mr Hicks said: “I’ve had an absolutely wonderful time and can’t think of anything better than to have all my family around me.

“Reaching 100 is quite an achievement and there’s something very emphatic about it.

“I love Henley and have always enjoyed living here. It’s been very good to me and my family and there’s so much going for it — the river, the golf club and, of course, the beautiful countryside.”