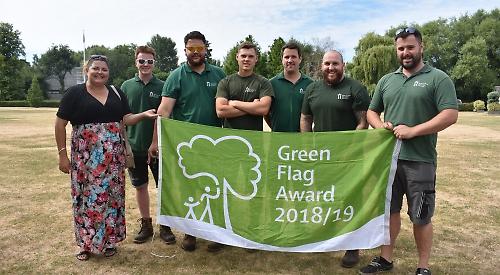 A BEAUTY spot in Henley has won its fifth consecutive Green Flag award.

Town councillor Kellie Hinton dedicated the prize for Mill Meadows to former park services manager Gareth Bartle, who passed away in May aged 53.

The meadows were inspected by judges in early June where they were given a tour by Cllr Hinton, senior park warden Karl Bishop, horticultural warden Kyle Dowling and council administrator Becky Walker. As part of the inspection they looked at every aspect of the park and how it is looked after.

The award recognises the park for its wide range of facilities which are maintained to a high standard by the town council’s park services team. Some of the features of the area include the bandstand, bowling green, putting green, toddler playground, adventure playground, sensory garden and celebration beds.

Cllr Hinton, chairwoman of Henley in Bloom, said: “It’s not like a Britain in Bloom competition where the judges look at what you present them, the Green Flag judges look at every aspect of management and procedure used to best manage the area.”

Cllr Hinton praised all the park staff and particularly Mr Bishop for leading the team for the last six months.

She said: “It’s been a transitional period after Gareth leading the team for 13 years. He put in the foundations that Karl and the team can build on and take forward. We are going to continue to build on his legacy.”

As part of winning the award the town council has been given a flag which will be displayed near Leichlingen Pavilion.

This year 1,932 Green Flag awards were given out in the UK and include parks, gardens, cemeteries, universities, museums, hospitals, shopping centres and canals. Other locations to win a prize included Caversham Court Gardens, off Church Road, in Caversham.