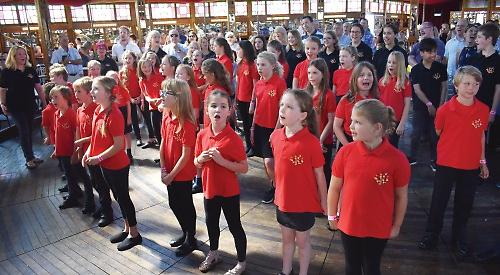 There were performances from 10.30am to 2pm and the day also featured magicians, glitter tattooists and unicorn balloons, while babies could dance at Baby Loves Disco at the festival’s Pure Heaven nightclub.

Among the acts this year were Ben Faulks, aka Mr Bloom from the CBeebies TV show Mr Bloom’s Nursery, who performed on the “floating” stage.

The interactive performance was inspired by the love of food and flavours and he delighted children by handing out vegetables to the crowd. Mr Danger’s Really Safe Show also proved popular with youngsters with his combination of clowning, character comedy and puppetry.

He wore a straightjacket while his counterpart juggled knives with a pint of shandy on his head.

The Henley Youth Choir also performed at the festival’s jazz tent and young musicians from Acoustic at Magoos, who have played for the last three years, played in the the Bedouin tent.

The Wargrave Community Choir also appeared on the “floating” stage.

In the last two years the youth choir has performed but this year also led a workshop for visitors to get involved in under the guidance of musical director Peter Asprey.

He taught them two songs – This Little Light of Mine and A Million Dreams from The Greatest Showman.

The junior choir of about 40 children sang a traditional American folk song called Oh Shenandoah while the 15 seniors sang Who Is Sylvia? and Fie On Sinful Fantasy, the words of Shakespeare set by jazz composer George Shearing.

Fi Harding, manager and administrator of the Henley Youth Choir, said: “It was absolutely amazing, we were so pleased and it was really well received by everybody.

”It was a wonderful experience and we’d like to do something similar next year.”

Ticket sales for the family Sunday increased for the fourth year running.

It was introduced in 2015 by the then new chief executive Charlotte Geeves who wanted to make the festival more accessible and since then it has gone from strength to strength.

Ms Geeves said she was delighted with the response to the day.

She said: “We started it four years ago for attracting an audience that doesn’t necessarily come to the evening events and it has grown steadily over that period.

“Primarily it’s aimed at four- to 10-year-olds. The afternoon has a very different feel but it’s delightful and children have a great time.

“They’re our future audience and it’s really important to engage with younger people to show them everything about art and music that they may not get an opportunity to engage with on a regular basis.

“I feel it’s very important we should give something back to our local community.

“The weather obviously helped enormously and the ticket price has stayed the same for the four years we have been doing it and our intention is to keep that way.”