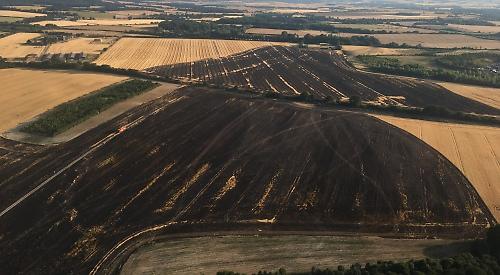 A FARMING family say they feel lucky none of their livestock or property was lost in a blaze which destroyed farmland in Ewelme.

The huge field fire spread to more than 800sqm of land at Ewelme Down Farm, with roads in the area closed and large plumes of dark smoke visible in nearby Benson.

The land is owned by the Wallis family and Rachel Wallis, who runs the Chilterns View, a collection of six private lodges for guests, said she feared they would be destroyed by the fire.

The blaze, which is believed to have started accidentally, needed 10 crews, including one from Henley, to get it under control.

They were called shortly before 5.30pm on Saturday and neighbouring farmers also created fire blocks on the edges of their fields by ploughing through crops.

Miss Wallis had to evacuate six couples from their lodges and call the Five Horseshoes pub in nearby Maidensgrove, where another couple were, to warn them.

She said: “I was in my house and my brother Bernard called me to say ‘the farm’s alight, the fields are alight, evacuate your guests from the Chilterns View’ which we did immediately.

“I saw smoke coming over the hill. By the time I’d got the guests out and come back to suss it out there were flames coming towards the lodges and you could hear loud crackling noises from the burning crops. I thought I was losing the business.

“It was the change of wind direction that saved the lodges, plus the fire service and the local farmers and the community. We had five local farmers who stopped their harvest to help us.

“The wind changed and the fire went back on itself, so the farmers really helped save Grundon and Potters Farm.”

Miss Wallis, a former Benson and Crowmarsh district councillor, added: “I feel extremely fortunate. I feel very proud of the farming community around us, there’s nothing like it — they are good friends and good people. They stopped everything.

“My guests haven’t been put off coming to stay again. They couldn’t believe the support and how everybody rallied around and they all stayed that night.” The fire was extinguished using hose reels and beaters. The National Police Air Service also offered air support to help direct firefighters to the edges of the blaze.

Mr Wallis said he’d lost 66 acres of standing barley plus 50 acres of straw used for bedding for his pigs, which were all unharmed. He said: “I just want to thank my neighbours who came out and helped — it could have been an awful lot worse. They saved the day really.

“It’s quite a flinty field so we think the combine might have gone over a flint and that might have caused the fire, but we’re speculating. I feel very fortunate. We had six houses on the farm and we could have lost those.”

Firefighter Dave Bray, who attended the incident, said: “This was a very challenging incident for all of the fire crews as they had to work in very hot ambient temperatures.

“We were also aided greatly by local farmers, who upon identifying fire immediately commenced creating fire breaks around the outside of the fields.

“This helped us in preventing the fire spreading to a nearby pig farm, as well as other buildings.” Dominic Taylor-Lane, 50, who lives in the village was preparing for his 50th birthday party at the time.

He told the Henley Standard: “I looked up and thought there was a thunder cloud. Within a couple of minutes it was fairly clear it was smoke.

“I went down to the common to have a look and there were literally flames coming above the top of 40ft trees.”

Mr Taylor-Lane praised the efforts of firefighters saying he feared the blaze may spread to the common and closer to the village itself. He explained: “It was fairly obvious that the fire in the field was literally just the other side of the hedge and a road near the common, which is tinder dry also. They did an amazing job to stop it getting across.

“At the beginning of the fire the wind was pushing it towards the common and then the wind seemed to swing around and take it towards the pig farm. Given the ferocity of it it could have been a whole lot worse than it was.”

He added: “It did flair up again on Sunday apparently and there were two engines up there in the afternoon.”