Swan numbers fall again due to flu and dog attacks 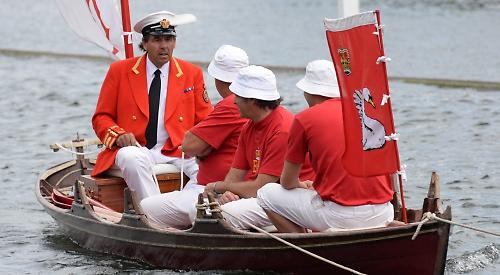 CHILDREN from a Henley school took part in the official count of swans on the River Thames in and around the town.

A group of 30 pupils from Sacred Heart Catholic Primary School helped to weigh and measure a family of two adults and three cygnets that were caught near Henley Bridge as part of the annual swan-upping ceremony on Wednesday last week.

The youngsters, who are all in year 5 at the school in Vicarage Road, joined in while on a trip to the town’s River & Rowing Museum in which they were escorted up the Thames towpath to observe animals and plants.

They encountered the Queen’s swan marker David Barber at the boat tents used for Henley Royal Regatta near Leander Club on the Berkshire bank, where a crowd had gathered after the family were spotted.

Mr Barber, who lives in Henley, was accompanied by representatives of the Crown and the Vintners’ and Dyers’ Livery Companies, all of whom had travelled down the Thames in traditional wooden rowing skiffs.

They shout “all up!” when they spot the birds then catch and restrain them before weighing, measuring and checking them for injuries. Cygnets are either tagged in one of the companies’ colours or left unmarked, meaning they belong to the Queen.

A five-strong family were the only ones sighted between Hambleden lock and the town centre this year although a group of 11 were later sighted at Marsh Lock. This is the biggest brood seen in many years of swan upping.

The family originally had eight cygnets, but adopted four from above the lock. However, this is still an overall decrease on the 18 swans spotted on the same stretch a year ago.

After the count, during which the children were invited to call out readings from scales and tape measures, Mr Barber let the children pet the cygnets before releasing them back into the river with their parents. He then gave a short talk about the ceremony and passed around a model of a swan egg before taking questions.

The boys and girls were presented with a certificate signed by Mr Barber to commemorate the occasion.

Their teacher Jackie Park said: “It was really good fun. When we heard there was something exciting going on we rushed along the towpath to get there and delayed our lunch to take part. The children are pretty hungry now but they really enjoyed it!”

Mr Barber said the family, who were nesting further towards Temple Island, originally had five cygnets but lost two to a dog attack. He said numbers were down on the river generally due to bird flu, dogs and even shootings by thugs.

He said: “There was an attack on the same nest last year and although the Swan Rescue charity put up a fence on land, people were letting their dogs swim in the river and they could get round it. It’s a terrible shame and people really must take greater care.

“We have expected a lower number for various reasons. We counted 132 last year whereas in 2015 it was in the 80s. We’d consider it a good result if we got more than 100 by the end of this week.

“However, we hope to see a gradual improvement through educating young people, as we’ve just done. It will take some years to really see the benefits but they really enjoy it and take a keen interest.”

The total of 16 remains a significant improvement on the seven found in both 2013 and 2014.