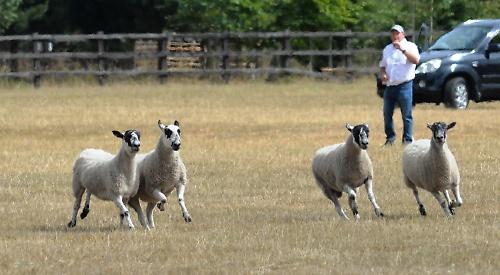 ATTENDANCE was about 25 per cent below the normal level at the 24th annual Henley sheepdog trials because of the ongoing heatwave.

The Henley and District Agricultural Association, which organised the event at the Henley Showground in Hambleden on Sunday, said temperatures of up to 27C encouraged many families to stay at home instead.

However, the show went ahead on the advice of the International Sheep Dog Society, which said it was safe to do so as long as the dogs and their charges were not kept out for too long.

All 53 dogs who competed were given a cold bath immediately after leaving the show arena while the sheep were kept in a pen beneath a shaded copse and given a large trough of water.

Organisers also brought in a larger number of sheep than usual so that none took part in more than one round of the competition. Each dog started with 100 points and had to herd four sheep around a course, at one point splitting them into two groups of two before driving them back to their pen. They lost points every time they showed poor form.

The winner Glyn Howells and his dog Cap came from Carmarthen in Wales, as did third-placed owner Angie Driscoll, who became the first ever female Welsh national champion in January, with Mazi. Angie Blackmore and Del, of Herefordshire, placed second.

Entrants came from across Wales and southern England and also included Anita Tackley, of Mill End, and her dogs Moss and Joey, and Ben Smith, of Oxfordshire, with his dogs Ben, Joes and Spot. There were three fewer than last year but still more than the 30 or so who entered in 2016.

The judge was Rae Lutman, of Chichester, while the sheep were provided by Oliver Bowden, of Mill End Farm. Mr Howells was presented with the Perpetual Rose Bowl Trophy by the owners of Burrow Farm in Hambleden.

There was a range of stalls selling hot and cold food drinks as well as tractor rides and demonstrations by the Berkshire Guild of Spinners and the South Chiltern Beekeepers. Visitors were welcomed by a team of volunteers including Henley town councillor Kellie Hinton.

Jo Taylor, the association’s manager, said: “It went very well from the handlers’ point of view. They really enjoyed themselves as there aren’t many events of this kind left and they love the fact that we’re keeping the tradition going. We also had some spectators who’d come up all the way from the New Forest.

“It wasn’t the best year from a financial perspective and that was reflected in our take from the tractor rides. I think it’s to be expected because people don’t want to bring children when it’s so hot but we’re hoping it will improve next year and we’re lucky to have many regular supporters who always attend no matter what.”

The association’s next event will be the 127th annual Henley Show which will be held at the showground on Saturday, September 8.